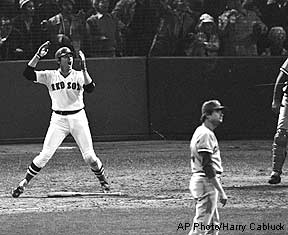 With the World Series starting tonight, it seems like an appropriate time to share some Fall Classic memories.

Baseball has never been my top spectator sport — it falls somewhere behind tennis and somewhere ahead of sumo wrestling — so the memories are not abundant. But these moments were powerful.

My first is from the 1975 World Series between the Red Sox and Reds. I was in eighth grade. Game 6 of that series was the first time I realized baseball could involve almost unbearable drama. Carlton Fisk’s homer to win that game for the Red Sox is the moment everyone remembers. Fewer seem to remember that the Reds came back and won Game 7. 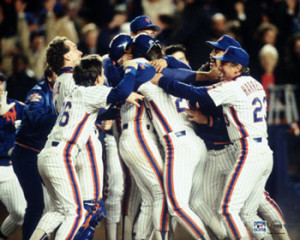 1986 was the one year I was totally into baseball. Julie and lived in New Jersey and for some reason latched on to the Mets that year. We watched every regular season game on WOR Television — with commentary from Tim McCarver who works the nationally broadcast games on Fox these days.

But the Mets were worth it that year. They won 108 games, beat the Astros in the NLCS, and then faced the Red Sox in the World Series.

I’m not including the picture of Bill Buckner’s error in Game 6. That’s because people forget that the game was already tied, thanks to Bob Stanley’s wild pitch, and there’s no guarantee that he could have thrown Mookie Wilson out at first anyway. Plus, the Mets still had to come back and win Game 7. Which they did. See above. 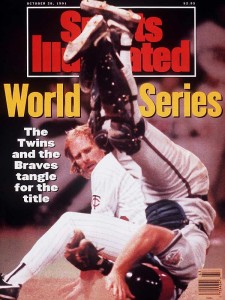 By 1991 we had moved to the Carolinas where all right thinking Southerners root for the Braves.

And after years of mediocrity, the Braves rooted back that year.

Their series with the Twins was one in which there really were no losers. Each game was close, and Game 7 was a masterpiece.

Unfortunately, the Braves had to wait for more years for their first title in Atlanta.

And we Southerners have been waiting 14 years for the second.

The 2001 World Series was played in the shadow of 9/11. It would have been so good for the Yankees to win. The victory would have helped bring healing to the city where so many were in unspeakable grief.

Just playing the games seemed cathartic for city and county.

And in spite of that, I still couldn’t root for the Yankees. 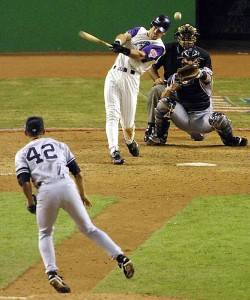 When Luis Gonzalez’ bloop single in Game 7 brought up the winning run, I jumped up and down as if I was born in Phoenix.

And the Texas Rangers have never won a playoff series, much less sniffed a World Series.

So what about this year?

Can I root for both to lose?