Words In The Family

As I posted on Friday, I spent the first part of the weekend in Austin, Texas where my 97-year-old mother Betty Davis presented the first-ever Betty X. Davis Award For Young Writers Of Merit.

The gala was all part of a writer’s conference hosted by the Austin Chapter of the Society Of Children’s Book Writers & Illustrators.

But when the big moment arrived on Friday night, my mother stood and delivered an impromptu speech. 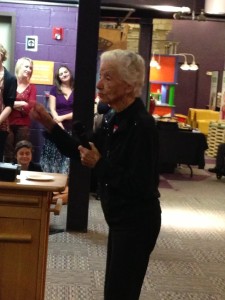 But my mom did all that.  The best part of her talk was when she quipped that not too long ago a child asked her, “how did you ever get to be so old?”  The answer:  “well, I got an early start.”

After the talk, she presented the awards to a third grade poet, a seventh grade playwright, and a twelfth grade essayist.

And that was that.  And well worth the trip.

Back in Charlotte, I was delighted that Marty Minchin wrote another piece for the Charlotte Observer about our church’s Home Project.  While her earlier article spoke about the sermon series and the Miracle Goal of $150,000 in a single Sunday to heal the wounds of domestic sex trafficking, this second story was a follow up that included our results.  Here it is:

When the offices of Good Shepherd United Methodist Church opened on Jan. 28, church members began filing in. They’d given money during the church offering the day before, but after some thought, decided they wanted to give more.

The day before, the church had concluded a month-long Sunday series about the issues related to sex trafficking in the United States. On Jan. 27, they asked people to give money to help buy and renovate a home in the Charlotte area for underage victims of sex trafficking.

The church hoped to collect $150,000, which would pay for the house and major renovations. About 2,200 people attended the church’s Sunday services on Jan. 27, an attendance record for Good Shepherd Church for a non-Easter Sunday.

That morning, Pastor Talbot Davis began to entertain the thought that the church could exceed its goal, maybe even raise more than $200,000.

He waited anxiously the next day. The woman who makes deposits for the church finally texted him the total – $367,000.

“I was just speechless,” Davis said. “I put on my reading glasses to make sure I read it right.”

The sum grew to almost $390,000 over the week as church members stopped by the office to give more. One person gave $30,000, and seven gave more than $10,000. Just as meaningful, Davis said, was the gift from a family who the church had once helped make their rent payments.

“The people at this church are just phenomenal,” Davis said. “When they are inspired by the right cause they love to think beyond themselves.”

All of the money will be given to On Eagles Wings Ministries, a nonprofit organization based in Asheville that is expanding to Charlotte. The group closed on its Charlotte-area house this week and plans to open it this summer.

“We were shocked,” said Emily Fitchpatrick, founder of OEWM, about the church’s gift. “We just could not believe it.”

With gifts from other churches, OEWM will begin its work in Charlotte with more than $400,000. Fitchpatrick said that was enough to buy and renovate the house and pay for at least a year of operating expenses, which will be about $150,000.

“I’m still just blown away that they were able to raise that amount,” Fitchpatrick said.

Four girls can live in the Charlotte-area house at a time, and the girls usually stay about a year.