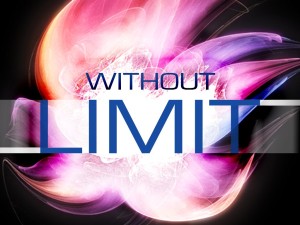 We launched Without Limit yesterday.

The crowds were large, the music was good, and my message was a bit more “raw” than usual.

In fact, I had toyed with the idea of delivering a message totally off the cuff — no preparation at all. But I had concern that I would simply repeat myself trying to find something interesting to say.

So I prepared my words for yesterday, but with much less precision than usual. There were also parts of it that were more “in your face” than usual as well.

But anyway, two series could hardly be more different than the two that have started 2009: Top Secret and Without Limit. Top Secret delved into relationships, psychology, and healing while Without Limit will be much more theological and congregational.

There is a method behind that arrangement, however, as I usually try to alternate series that are horizontal with those that are vertical. In other words, some series have to do primarily with relationships and ambitions here on planet earth (horizontal), while others deal much more specifically with our relationship with God (vertical). Those distinctions are not cast in stone, but they help me to think through what we are doing.

So what kind of series will follow Without Limit in four weeks? I’ll let you know soon, but can you predict its direction?