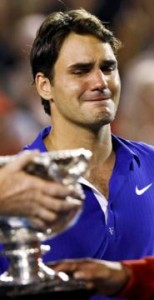 This is Roger Federer in tears after losing to Rafael Nadal in the final of the Australian Open this past Sunday.

Federer losing put a downer on what was otherwise a good day (see yesterday’s post).

If he’d won, he would have tied Pete Sampras’ all-time record of fourteen Grand Slam titles. Better yet, Rod Laver would have handed him the trophy. Many people consider Laver the greatest player ever, even though his peak was back in the late 1960s. He’s one of my childhood heroes — so much so that his picture is on the wall of my office. 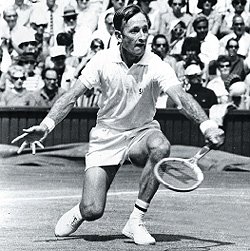 But none of that happened to Federer. Instead he lost to Nadal. Again.

I lost to Brad Stoffel 15 times in a row when I was a kid. And I usually cried afterwards as well.

But match #16 was a different story.