First of all, the snowstorm that hit Charlotte on Saturday evening was the worst possible kind from a preacher’s perspective:  strong enough to hinder Sunday attendance but not so strong that we needed to cancel.  It also hit on Saturday evening, meaning many people’s final visual was of snow everywhere — meaning no church on Sunday.

But the roads (at least on the Charlotte side of things) weren’t bad, and we went ahead with all three services. We had about half the number of people we’ve been having.

So I had some frustration around all that because I felt what we had prepared for people to experience was meaningful.  The message, called Honest To God, came from Psalm 13 and landed at a counter-intuitive bottom line:  Your anger at God is just your praise of God in disguise.

Drawing on the rich language of that 13th Psalm — four consecutive brazen questions of “How long, Lord?”  that open it up — we recognized together that giving voice to frustation with God is no sin at all.  It is instead a courageous way of acknowledging that God is sovereign and inscrutable.

For the response time, we had placed Post It Notes in the bulletin, all of them emblazoned with Psalm 13’s question:  How Long?.

Then, as our band played a glorious version of U2’s “40” we invited people to write down the question they had for God or even the frustration they had with him.  Then we encouraged them to place that note on the wall of our Worship Center — making it, paradoxically, a wall of complaint that was truly a wall of praise. 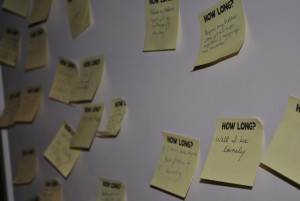 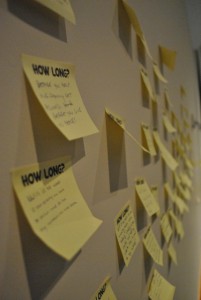 Snow or not, I’m glad with what our team put together and how people responded.

Here’s a transcript of the sermon itself.  Wherever you read REFRAIN that means Your anger at God is just your praise of God in disguise.

Now usually I like to get to truth and dwell on truth when we are together on Sundays, but can I start out with a lie today?  A big lie?  One that gets told, re-told, re-re-told to the extent that people accept it as gospel?  One that if you are to second guess people will think you’re a lunatic or heretic or both?  Here it is.  You ready for the Big Lie?  You can’t question God.  I’ve heard that my entire life in ministry.  Heard it uttered by people who were either experiencing – OR, MORE LIKELY, WATCHING OTHER PEOPLE EXPERIENCING – the most painful seasons of life.
I remember being on the job two weeks (1990!) and a grandmother lost both her grandson and her infant great-grandson in the same horrific car crash.  And when I was at her house, what was one of the first things she said?  The big lie: “well, I was always taught you can’t question the Lord.”  So I heard it two weeks in and for 23 years since – through divorces, deaths, national tragedies, and personal traumas and the refrain is always the same: “I always heard you can’t question God.”
And, each time, I’ve come to realize, spoken by people who may be long in church but are short in the bible.  Because the bible is so interesting, so rich, so surprising when you actually READ what it says.  We’re going to look together in just a few minutes at Psalm 13 but before we do, I have to let you know something.  What I’m going to tell you will be old news to some of you and an enormous “A-ha!” to others.  Here it is: the book of Psalms was the hymn book for ancient Israel.  It’s where the people got the songs, the prayers, and the rituals that they used in corporate worship.  It is, more or less, 150 different selections of praise and worship.  Complete with instructions to “Turn & Greet”!  What we do digitally, they did on parchment.  But the result is the same.  And this Psalm 13 is right smack in the front section of this book of praise.  Tuck that away.
And look at how Psalm 13 begins:
How long, O Lord? Will you forget me forever?
Impatient, frustrated, insistent . . . and all that gets expressed from person to God.  Now: person here is most likely King David and the setting is probably in the midst of battle, Civil War, flight for his life, or all of the above.  It’s not overly specific – perhaps as a way of showing us that David’s experience is everyone’s experience.  But it’s remarkable to me that David is comfortable enough with God to ask him with such bold, frank, honesty:  “How long?  I’m tired of waiting for your answers, you promise more than you deliver, I need your intervention, and I’m frustrated at your inaction.  HOW LONG ARE YOU GOING TO KEEP ME WAITING?!?”  So to those who have been taught that you can’t question God . . . gulp.  There it is. In the bible itself.
Then again!  More times!

How long will you hide your face from me?
2 How long must I wrestle with my thoughts
and every day have sorrow in my heart?
How long will my enemy triumph over me?

And when it’s you in that place & you need that time to praise God in this most unorthodox of ways, know this:  today’s truth is not an excuse to whine, to stay, to land in a state of perpetual anger with God.  It is instead an invitation to honesty.  A place you visit give voice to, and then after a time move to another place.  My goodness I remember that time back in July of 1997 when I thought everything I’d ever worked for at the church in Monroe was going to fall apart.  Been there seven years, seen a lot of good and thought it was all just going to implode.  So I remember the most trusted man in the church came over, we sat outside, and I couldn’t even begin talking before I just started balling. Now: I’ll cry sometimes when Chris sings and at the divorce scene in Hope Floats, but not a lot else. Not this day. So frustrated with people, so confused with God, that it all came pouring out.  He didn’t know what was going on so he did the only logical thing: started crying, too.  Why, Lord?!  Guess what?  Things didn’t get better immediately!  They did eventually.  And that honesty was a critical part of it.  An odd way to praise God, but a way nonetheless.  A Psalm 13 way. REF

Life works out that way more often than not: with confused tears in summer heat than with a tidy bow and everything’s all better.  But in spite of that ambiguity, what I want so much for you is the freedom to be honest with God.  Whether you write it, sing it, pray it, to give voice.  To have the courage and the intimacy with God to be able to say, “How long? When will you stop hiding your face?  When will you remember me?”  I don’t know when and how he’ll answer; I just now that asking him might just be the loudest praise song you’ll ever sing.