When A State Changes Its Name

I told you on Monday that our ministry time in India focuses on the northeastern state of Orissa.

And then our plane landed here later that day and I found out the name of the state had been changed in recent months.

What was Orissa is now Odisha.

The two words sound similar — whether coming out of mouths that speak English or the local language of Oriya — yet the name change is highly significant.

In recent years, the political leadership of India has tried to remove most remnants of British influence over the land. (As many of you know, India was a British colony for the 200 years prior to 1947.)

That’s why the city of Bombay no longer exists. Today it’s Mumbai.

So the name Odisha is more indigenous than the Anglicized Orissa.

What does that mean for ministry in the 21st century? Not a lot, perhaps.

Or perhaps a great deal. As India’s prosperity and influence grow, so does its national pride. Deservedly so. And with many people here, that development also involves a suspicion of all things Western, Anglo, and American. Not hostility as we might find in some countries. Instead, a guarded suspicion.

So our team does all it can to honor what is indigenous in Indian Christianity. All too often, believers from the US have wanted developing peoples to become “American” as part of becoming “Christian.” Well, Acts 15 settled that long ago. Christ calls people to himself first and to a culture second.

So we’ll honor that which is from Odisha — no longer Orissa — while sharing what we worship in Christ with our new friends.

Here’s a dinner shot with our hosts, PR and Anju Misra and their family: 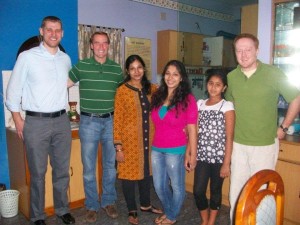 Later on Wednesday, we drive to the town of Balasore, Odisha, to begin training and encouragement with local pastors there.