I’m so pleased to watch what God is doing during The Shadow Of A Doubt.

The music has been ideal, the crowds have been extraordinary, and I have felt good about both preparation and delivery of the messages.

As an added bonus, yesterday we got to hear from several of the young women who have been rescued from domestic sex trafficking and are now living in the Hope House that Good Shepherd bought and renovated last year.  More on that moment in Wednesday’s blog.

I am including a rough manuscript of the sermon in the space below.  The sermon design was inspired by a message by Andy Stanley, given a number of years ago to Northpoint Community Church in suburban Atlanta.  The particulars come from me and this church.

We like to have alternatives in life, don’t we?  Like if you went to a restaurant & opened the menu & there was JUST ONE ITEM there 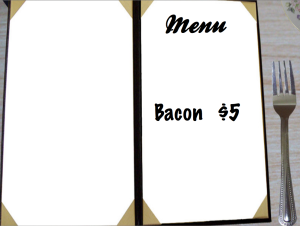 Your prayers were answered as Kate had a powerful encounter with the Holy Spirit on Sunday. She nearly drug me to the car after service.  While sitting in the parking lot she said “I stood at the invitation…I stood and I felt like I was going to cry so bad, I had to hold it in mommy. It felt good, I was happy but I had to cry! “  The child who rarely cries had huge tears streaming down her face as she was most certainly moved by the Spirit.  We talked about the Holy Spirit and how even though we can’t see Him, we can feel God’s love and power in our hearts when we follow Him and exercise our faith.

She was unusually quiet all day.  I could tell by her behavior and energy level that something transforming took place.

She coveted the booklet you gave her and carefully filled out the questions on the back before tucking it in a special box.

Thank you for living by your mission of inviting all people into a living relationship with Jesus Christ…even the little ones.
We have seen too much to go anywhere else! We have come to believe!
See, time and time and time again you’ve seen too much and felt too deeply for it to be anything but true.  I’m not telling you anything you don’t know; I’m simply reminding you of what you are tempted to forget.  You’ve tasted too much goodness & sweetness through the years & so you know that the alternatives are nothing but empty promises.  To whom shall we go? Who is better? Stronger? More liberating?  Who conquered death? No one and no thing.  Oh, don’t be the one who walks away & then comes back 10 years later w/ no more answers but w/ a debris field trailing behind you.  Ask yourself what’s the alternative BEFORE you leave & see all the options for the empty promises they are.  And then fasten yourself to the eternal WHO towering over all the pretending WHATS.