What A Photo And Its Caption Taught Me About Leadership

I’ll admit it: I have an uneasy relationship with leadership.

In some ways I think I lead well. In a lot of others, I know I don’t.

Nevertheless, in this ongoing life tutorial about leadership, I learned a valuable lesson recently. And that lesson stemmed from this photo that one of our staff pastors took of his children raising their bibles during last week’s livestreamed service at Good Shepherd. 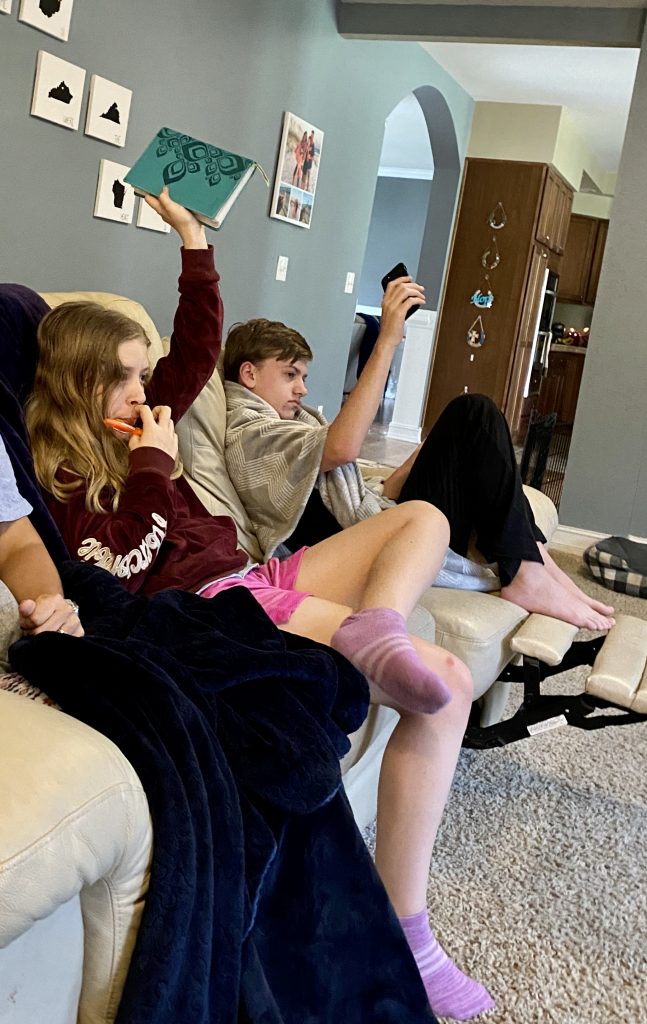 In his original posting, our staff pastor added a caption:

A moment of oddity that shapes our identity as a community.

Well, Good Shepherd UMC, where I have pastored in Charlotte, NC since 1999, is a multi-media, multi-ethnic, and multi-generational church. All of our services in all of our venues and campuses are modern in their approach: we have worship bands, casual dress, no hymnals, and the kind of music you hear on the local K-Love radio station.

All of which means we have precious little of what most United Methodists refer to as “liturgical moments.” We do declare the Apostles’ Creed, though not every week, and we do an occasional screen-based responsive reading, but that’s as close as we come to a typical Methodist liturgy.

Yet within that “non-liturgical” format, we have developed a moment of routine, predictability, and, dare I say it, liturgy. That comes when the preacher for the day introduces where the sermon’s Scripture is located (though we don’t read it ahead of time but weave it into the sermon). And then what follows is this basic script.

At Good Shepherd, we really value you having your own eyeball encounter with the Scripture on a Sunday morning, and that’s because we believe a couple of things about the bible. The first is that although it has pages and words and a cover and it looks like a book, it is NOT a book. It’s a library, a collection of books, written by many authors over a long period of time in multiple writing styles. For example, today’s reading from Philippians is from the section of the library devoted to correspondence – it’s a real letter written by a real author to a real church struggling with real issues. All that is a fact that you may not have known, but it’s true and helps us understand Scripture better.

The second thing we believe here moves to the realm of treasured belief. You may not believe this way yet, and that’s OK. We just want to be honest about who we are and where our leadership stands. It’s this: we in leadership at Good Shepherd believe there is no library like this one on planet earth. We believe that God breathed his life into its words and put his truth on to its pages. The bible is inspired, eternal, and true.

And because we believe that, we do something different here when we talk about it. We lift it up (and people do) and if you’ve never been here before, you’re looking around and seeing people lifting phones and iPads and programs and even bibles and you’re thinking, ‘this is strange.’ You know what? We admit it! It IS! But we have discovered that this is a moment of oddity that shapes our identity as a community: we’re a collection of people joyfully surrendered to the authority of the word and eager for its power to be unleashed in our lives.

So when I saw the photo above and realized that entire families were lifting their bibles even in their home while under quarantine, I realized yet again: a major part of leadership is saying a few things over and over and over. Leaders realize that when they get tired of saying it, those who hear them are just then “getting it.”

Leaders need to make sure that the few things they say A LOT are theologically accurate and rhetorically memorable and that they help shape the direction of the organization they lead. A major part of Good Shepherd’s identity is that it is a church who understands “not book, is library” and it’s a library under whose authority we are privileged to stand. If both newcomers and long-timers at Good Shepherd know nothing else about the church, they know THAT.

So in this case, at least, my appreciation of language and fondness for routine has helped my tentative leadership become more confident.

Because this I know: once leaders find those direction shaping phrases, they should say them. And again. And again. Until those same phrases and even the actions that support them appear in random captions on social media postings.