Riley and I  spent a few days earlier this week in Austin, Texas, visiting my 99-year-old mother as well as an assortment of siblings, nieces, and nephews.

I wanted my mom to see Riley in the aftermath of his graduation from UNC-Chapel Hill  AND I wanted to see her at the midpoint between her 99th and 100th birthdays. (I saw her last November for number 99 and of course my whole family will be back here this November for a blowout on her 100th.)

What I didn’t count on happening, though, was watching a National Championship happen.

It turns out that the NCAA Men’s and Women’s Tennis Championships was held this week in Waco, Texas (no biker bar jokes, please) on the campus of Baylor University.  Waco is only 100 miles from Austin.

I read in Tuesday’s paper that the final match would be that day, and would feature two teams who have ascended to the upper echelon of college tennis only in the last decade or so:  Oklahoma University (OU) and the University of Virginia (UVA).  (Back when I played college tennis, a title match between those two would have been as likely as a BCS Football Championship between Wake Forest and Northwestern.  In the 80’s it was always Stanford versus fill-in-the-blank.)

There was an added attraction: one of the members of UVA’s team, Thai-Son Kwiatkowski, had taken tennis lessons alongside Riley when Riley was eight and Thai-Son was six.  In fact, I remember watching with amazement in those days as Kwiatkowski pummeled ball after ball against much older hitting partners at the Charlotte Tennis Academy.

So I persuaded my older brother and sister to join me and Riley for the 100 mile trek from Austin to Waco, bought some bleacher seats, and watched the drama unfold.

I noticed a few things have changed since I played college tennis in the 80s:

After hundreds of serves, thousands of groundstrokes, and tens of volleys, UVA won, 4-1.  Actually, Thai-Son Kwiatkowski won the next-to-last point for the Cavaliers, very calmly serving out the match in spite of the obvious tension in the stadium. As soon as UVA won the clinching point, the players and coaches stormed the court in frenzied, euphoric celebration.

I realized it was the first time I’ve ever seen a national championship won, live and in person, as it happened.

Not a bad way to spend a Tuesday in central Texas. 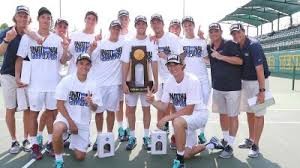