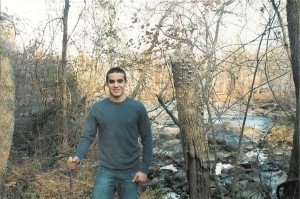 This is my son Riley.

He is a rising junior at Charlotte Christian School, and today he begins two-a-day practice with the football team there.

I can post his picture on my blog because he would never in a million years read my blog.

Today he’ll practice from 8-11 in the morning and then again from 5-8 in the evening as the team prepares to defend its state title. That’s a lot of time in the August heat. I’m proud of all the hard work he’s already put in, if for no other reason than that he can now bench press two of me.

He’s going to play linebacker for a team that already has three linebackers who have signed letters of intent with Division I schools.

And no, I never could get him really interested in tennis. He’s always liked the excitement, camaraderie, and contact of football.

And I bet he’ll still like it even after three weeks of two-a-days.