The U.S. Open is all about weaponry. Hard courts, hot weather, unruly fans, and the biggest weapons win the biggest prize.

So in light of all that, I’m giving the top five weapons of my lifetime. What particular shots have done the most damage in what we know of as the “Open Era” of tennis — from 1968 to the present?

5. Ken Rosewall’s Backhand. Rosewall’s career spans the two eras of tennis history — the amateur days before 1968 and the early years of the pro game in the late 60s and early 70s. That’s why he won the U.S. Championships in 1956 and the U.S. Open in 1970, both at Forest Hills Tennis Club just a few miles from the USTA National Tennis Center in Queens.

But it was his backhand that was simply sublime. He had the rarest of shots: a slice backhand that was not a defensive response but an offensive weapon. Wielding the racket like a surgeon’s scalpel, his backhand cut opponents up with uncanny precision and surprising power. I was there when his backhand return of serve broke Rod Laver’s game and heart in fifth set tiebreaker of the 1972 World Championship of Tennis in Dallas. 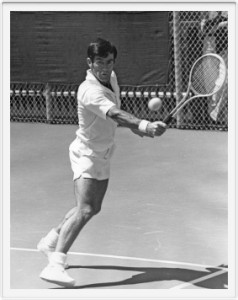 4. John McEnroe’s Serve. Other players have had harder serves. Still others have had more accurate serves. But none have had one as lethal as McEnroe’s twisting, turning, corkscrewing lefthanded delivery. Follow it up with his feathery touch volleys, and you have ample reason for Bjorn Borg’s retirement. I love the photo below with its bird’s eye view of McEnroe’s signature windup. 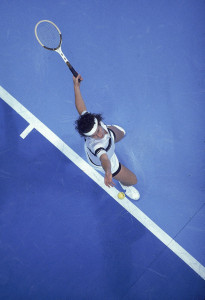 3. Roger Federer’s Forehand. It starts out looking like a throwback Eastern grip, closed-stance forehand. Midway through it transforms into a semi-Western grip blur. By the end time he’s finished with his thoroughly modern follow through, the ball is by you with impossible speed and improbable angles. I still can’t figure out how he does it. But he does. 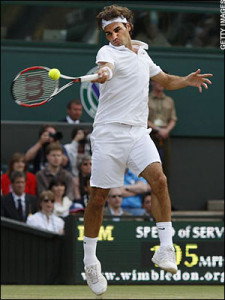 2. Rafael Nadal’s Forehand. I hate to admit it, but Nadal’s forehand is better than Federer’s. It’s the grip. It’s the spin. It’s the over-the-head follow through. It’s the biceps. But more than anything, it’s the fact the returning a shot laden with such power and spin leads to abject exhaustion on the part of his opponents. Six French Opens and counting . . . 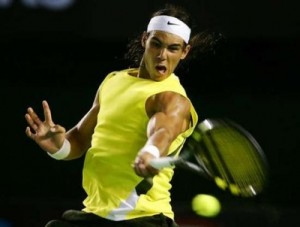 1. Pete Sampras’ Serve. Beauty, power, placement, and courage have harmonic convergence in this, the greatest weapon in tennis history. 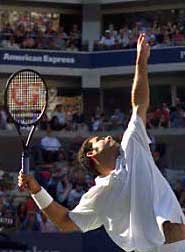