Several years ago, Roger Federer and Rafael Nadal played an exhibition match called “The Battle Of The Surfaces” in which half the court was grass and the other half was clay. 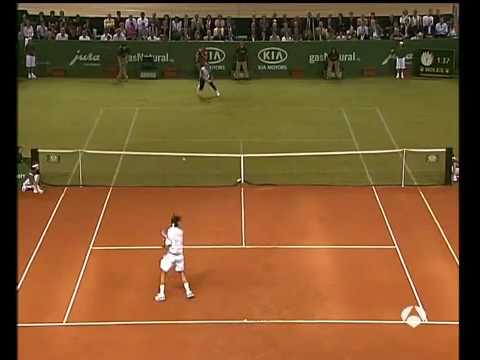 With that in mind — and as the tennis season switches from clay to grass this week — here the top five differences between the same sport on the two surfaces.  Which might actually turn it into two different sports.

2. Grass courts reward assault and clay courts reward defense.  Because grass courts have historically had much quicker and lower bounces than clay, hard-serving, net-charging tennis has been the primary way to play.  Clay court specialists have the knack for counter punching their way through the attack and confidence of more aggressive players.  These days, of course, all the top players are masters at turning defense into offense.

3. Grass courts have changed significantly in the 2000s while clay has remained essentially the same.  In 2002, Wimbledon changed the kind of grass on its courts, resulting in a slower surface with a higher bounce.  In other words, they made it more like clay!  Oy vey.  This is why players can win the title while playing counter-punching tennis (for example, Novak Djokovic and Andy Murray), something that would have been inconceivable in the 80s or 90s.   The clay in Europe plays with a bit more speed today than in earlier eras, but it remains a “come to the net at your own risk” affair.

4. Grass accelerates a powerful serve and clay blunts it.  One year, Bjorn Borg — who could serve a ton when he wanted to — won the French Open by spinning his first serve in softly.  He knew the clay would de-weaponize his hard serves, so he instead opted to start the point with a safe and predictable spinner.  After the point started, no one was going to make him miss or hit it past him, so no problem for Bjorn on his way to six French Opens.

5. As a teenager and nationally ranked player, I resolutely avoided all clay court tournaments and chased after what little grass I could.  You know, kind of like Roger Federer does now?  I skipped the clay court season.  It minimized my main strength — serve — and magnified my overriding weakness — inconsistency from the backcourt.  So why bother?  I did, however, play in the National 18-and-under Grass Court Championships held in, of all places, Tuscaloosa, Alabama.  Wouldn’t you know it, though?  I played well, advanced a few rounds, and then lost a heartbreaking match to … a guy who’d grown up playing on clay.  After he beat me, he advanced all the way to the Grass Court finals.