The rock world is buzzing with U2’s new song Invisible, released for free on iTunes on Super Bowl night.  You can read about it here.

Do they take themselves too seriously?  Yes.  Does it sometimes take one transcendent song to rescue an otherwise mundane album (like the way Magnificent delivers No Line On The Horizon)?  Yes.  Does their ambiguity regarding faith frustrate those of us who are Apostle’s Creed-certain?  Yes.

But all that aside, when it comes to emotion-pulling, adrenaline-racing, goose-bump-generating anthemic rock, are they the best band in the world?  Yes.

With that in mind — and with the looming release of an album-full of songs to accompany Invisible — I thought it time to revisit a post from 2010 in which I count down my top five favorite U2 songs: 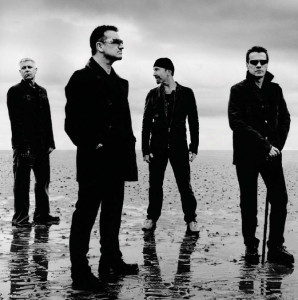 I remember first hearing U2 on the Philadelphia station WMMR (93.3 on your dial)in 1984. It seemed like that station played “Bad” every 30 minutes or so.

Three things have always stood out for me in U2’s music: 1) The sonic power of Bono’s voice; 2) the eery landscapes of the Edge’s lead guitar; and 3) the spiritual longing at the center of most of the lyrics.

So here they are . . . more than 30 years of songs distilled into my five favorites.

5. Hawkmoon 269. A forgotten song lost in the middle of a much-reviled album, Rattle & Hum. But I love it all from first chords to final howls.

3. Beautiful Day. When I first heard it in 2001, I thought, “oh, that’s OK.” But isn’t that the measure of a great song — it sounds better now than when first released?

2. I Still Haven’t Found What I’m Looking For. The gospel-choir version from Rattle & Hum is especially moving.  But a rendition of it with Bruce Springsteen isn’t half-bad, either.

1. Where The Streets Have No Name. Someone is doing this one at my funeral. I hope people will still know how to play it in 60 years. How about this Super Bowl Halftime version of it, just four months after the 9/11 attacks?