It’s been just over two years ago when, in the euphoria of Roger Federer’s sixth Australian Open and 20th grand slam overall, I wrote this piece that essentially declared the era of Djokovic & Nadal to be dead, gone, and buried.  It might have been pretty good writing but it was pretty awful predicting.

Sports can make you happy.  And they can make you sad.  From the ecstatic to the despondent.  So here are five times when it has veered to the latter.

Now: I am not including reaction to competitions in which I took part. Many of my losses in tennis were followed by tears or despair or both, starting with the first tournament match I ever played as an eight year old and ending with my senior year in college when we lost a nightmarish match to a hated rival, ensuring they won the conference championship and we didn’t.

So my five saddest sports moments as a spectator:

5. Texas defeats SMU, 38-7 in 1968. I was six. The SMU team featuring Chuck Hixson and Jerry LeVias was riding high. Our family made the trip from Dallas down to Austin for what I was sure would be an upset. What happened instead was a debacle. Texas was too good, too deep, and had just unveiled something called a “wishbone” offense … an offense that propelled them to 30 straight wins over the next two years. We were surrounded by “obnoxious” Longhorn fans — as if we would have been tolerable if the results were going our way — and I cried the whole second half.

4. NC State defeats Houston 54-52 to win 1983 NCAA Basketball Championship. Houston’s Phi Slamma Jamma seemed to have it all: Hakeem Olajuwon, Clyde Drexler, and mountains of style. They were also on track to be the first team from Texas ever to win an NCAA basketball title. I had no Carolina connections at the time, so no reason to root for Jim Valvano’s Wolfpack. When the Lorenzo Charles’ dunk went in, and many of my current friends celebrated, my heart went out.

3. San Francisco 49ers 20, Cincinnati Bengals 16, 1989 Super Bowl. We were living in central Kentucky at the time and I adopted the Bengals for a season. They responded to my endorsement with their best season ever behind Boomer Esiason’s passing and Ickey Woods’ shuffling. And they were within 70 seconds of winning it all until Joe Montana got the ball with a few minutes left and you knew the end before it happened.

2. (Tie) Rafael Nadal defeats Roger Federer, 2008 Wimbledon. I’m always for Federer against Nadal — he’s got a one handed backhand, he enjoys net play, and he turns sport into art when he’s on his game. In 08, he was going for his sixth Wimbledon in a row, and because of rain delays and turns of momentum, it seemed as though the match would never end. It did, sadly, in the London gloaming, with Federer missing a routine forehand and Nadal collapsing in some well-deserved glee.  Then Novak Djokovic defeats the same Roger Federer, 2019 Wimbledon.  This one might have been worse.  Federer choked. Two match points up, on serve, in the fifth, and he lost.  I can complain about the “slow grass” at Wimbledon all I want, but Federer had it and lost it.

1. Ice Bowl — Green Bay 21, Dallas 17, 1967 NFL Championship. Something about being six magnifies wins and losses, doesn’t it? I remember watching the game in the warmth of Dallas, passing the football in the front yard with my brother at halftime, and then disbelief and tears at Bart Starr’s quarterback sneak that beat the Cowboys yet again. 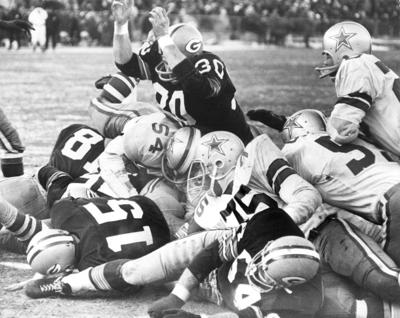