Last week was a pivotal one in my life as Don Henley released his first album in 15 years, a country-flavored bit of Americana (or Texicana) called Cass County. 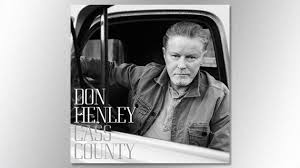 For those of you who don’t know, in an earlier life Henley was the leadest of the lead singers of the Eagles, providing the signature vocals for songs like “Hotel California,” “One Of These Nights,” and “Life In The Fast Lane.”

In a middle life, after the first demise of the Eagles, he went solo and produced what is frankly my favorite music of all time, including “The Boys Of Summer” and “The Heart Of The Matter.”

And now, as a 68-year-old in later life, he is returning to his roots.  Taking a break from the never-ending Eagles reunion, Henley named this solo work after the East Texas county where he grew up and stocked it with songs much like those he heard as a boy on his father’s car radio.

Here are five things you need to know after waiting a decade and a half for new music from Don Henley:

1.  There are no anthems . . . but the voice is still anthemic.  If you’re looking for The Heart Of The Matter, Episode Two or even The Men Of Summer, you’ll be disappointed.  No soaring, shimmering rock on Cass County.  Yet Henley’s voice retains its spellbinding power.  My favorite vocal moment is the declaration that Some pray for health and happiness, for riches and renown / But none of that will matter if the waters don’t come down in the tune “Praying For Rain.”

2.  Echoes Of His Earlier Work Abound.  The rueful “Younger Man” almost samples the melody from “Damn It Rose” off 2000’s Inside Job; the storyboarding of “Waiting Tables” brings “Lyin’ Eyes” to mind although with a more sympathetic lead character; and in “No Thank You” the singer gives the warning “don’t tell me to take it easy.”  Is that intended for Glenn Frey?

3.  The covers of vintage country tunes . . . must be for country fans.  When the “Sunset Grill” guy sings “The Brand New Tennessee Waltz“and “She Sang Hymns Out Of Tune,” I struggle to connect with the song and the format.  Or I’m just grateful to have it on CD and not cassette.

4.  He’s still got a poet’s touch.  “It’s the cost of living . . . and everyone pays” could have just as easily been penned by those other rock poets, Mr. Springsteen and Mr. Mellencamp.  Whoever wrote it, it’s really good stuff.

5.  The guest list is spectacular.  Mick Jagger (“Bramble Rose”), Vince Gill (“No, Thank You”), Dolly Parton (“When I Stop Dreamin'”), Merle Haggard (“The Cost Of Living”) and, best of all, Martina McBride in the album’s first single, “That Old Flame,” a song that merges rock & country into what is best called Nashville Pop.

6.  Nobody does angry, defiant, and content all at the same time any better.  “Where I Am Now,” the closing original song on the disc, is the one I’ll most likely be adding to my “best of Don Henley” list.