I went to Princeton for college.

There.  I said it.  I don’t ever preach it out of fear that people will think “he’s a snob,” or “he’s an elitist,” or “he is an egghead” and I’ll lose whatever common ground I had developed with them.

For those and other reasons, I generally keep it on the downlow (unlike my wife Julie, Princeton class of ’83, who will bring it up at the drop of a hat … actually, she brings it up BEFORE the hat drops).

I am much more likely to highlight that I went to Asbury Seminary, a school which, admittedly, has more of my heart than does Princeton.

Nevertheless, in the fall of the year I find it particularly timely (see below) to offer some reflections on what being an Ivy League grad means in ministry and in life 33 years after the fact.

1.During football season, my Saturday mood is NEVER influenced by how Princeton does.  This past weekend, for example, my son (UNC 2015) was despondent while my NC State friends were euphoric.  The Heels lost to Duke & the Pack upset Florida State.  Their fan bases live and die by those results.  (And it’s much more intense for SEC schools and for Clemson, of course.)  Princeton?  Do they even play football?  Well, yes.  They actually played the first college game ever, against Rutgers, in 1869.  We don’t play Rutgers anymore because Rutgers is too good for us.  Say that out loud:  Rutgers is too good for us.  And now you know why my Saturday mood does not and will not hinge on how Princeton does in football.

2.When I meet people who have moved to the Carolinas from the Northeast and especially from New Jersey, I can identify with them.  Yo!  I lived up there!  Seven years (four college, three as a married couple)!

3.I’m not brain, but I am a backhand.  My grades did not get me into Princeton.  The tennis coach did.  My freshman year roommate got 800 on his Math SAT (perfection) and 760 on his Verbal (near perfection).  Me?  Not so much.  Ironically, I graduated with honors and he didn’t.  Double irony: he did well enough in the early days of the internet that he retired at 48.  Me? Just learned how to do my job at 50!

Speaking of backhand, here I am in 1982 hitting one in a match against Brown. 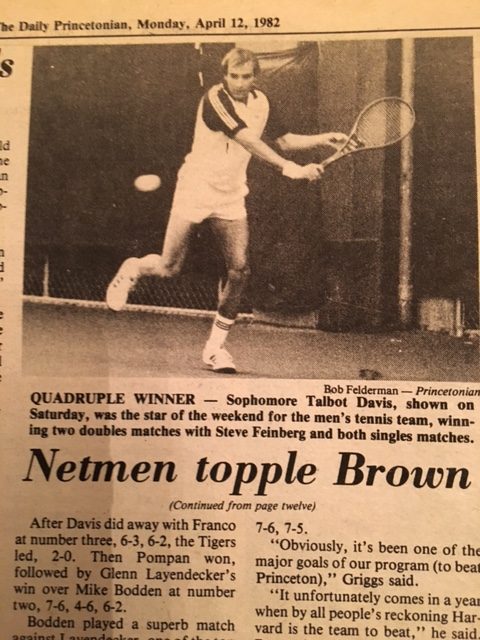 4. I’m a never ending English major.  Part of the reason I graduated with honors (in addition to working harder at school than I did at tennis since going there was a signal I wasn’t going to try the pro tour) is that I majored in English, a subject I loved.  My senior thesis was on Flannery O’Connor.  But these days, fiction is still the best source for my sermons and I think I could write a much better thesis now than I did back in 1984.

5.It set me up for my whole life.  I was reluctant to go there as an 18 year old Texan.  The bigger part of me wanted to go to Trinity University in San Antonio, become part of their historic tennis legacy, and try the pro tour four years later.  But family wisdom — as in, “you can’t turn this opportunity down!” — prevailed, and up to New Jersey I went.  I never felt completely at home up there — there’s a reason we’ve settled in the south.  But in spite of my hesitation and even in spite of the fact that I didn’t absolutely love the experience, going to school there set up my whole life.  It’s where I met Julie.  It’s where I heard the call to ministry.  It’s where I learned to have confidence as a writer, paving the way for this new-found privilege I have in publishing.  All in all, I see unmistakable evidence of God’s providence throughout — he put people and situations and events in my path, all designed to invite me into the kind of life that prepared me to serve alongside the people of Good Shepherd.

God was working on me before I was looking for him.  In Methodism, we call that prevenient grace, and I’m glad I got some of it — even if I had to go to New Jersey to pick it up.