When I went to college, ministry was not on my mind.  I had headed up north for school, recognizing that pro tennis was likely not going to work out, and therefore I should get a top notch education.  After that?

Law school is what I figured.  My father had been a law professor, an older brother was an attorney (now a judge), and it seemed to be in the genes.

Here are a few possibilities.

1.  English professor.  Once I decided AGAINST majoring in political science (why do that if I wasn’t going to law school) and in FAVOR of English (which works well with ministry), I sort of discovered a second calling.  I’m still an English major who never grew up.  And so I occasionally wonder what it would be like to lecture or write on the older classics by Flannery O’Connor and the newest classic by Nathan Hill.

2. Editor at a book publisher.  Little known fact: while living in New Jersey for the first three years after college, I submitted many resumes and applications for jobs at New York City publishing houses.  Obvious fact:  I went Zero-For-Manhattan.  Nevertheless, every so often I wonder about that occupation, especially when I visit the deliciously quiet offices of Abingdon Press.

3. Advertising Something Or Other.  I can’t draw or photograph or graphic design.  But I can turn a phrase and come up with good names for sermon series.  I guess none of it matches the brilliance of “Just Do It,” it’s nevertheless a world I would have enjoyed.  I think.

4. Sportswriter.  In those same three between-seminary-and-college years, I had a part-time gig as a tennis writer for the Trentonian newspaper.  I even had a piece on the Menendez brothers and their tennis exploits — about five years before their story turned deeply dark with the murder of their parents.  My piece was on their winning tennis, not their family dynamics.  Anyway, I’m glad I didn’t pursue that field too heavily, because have you seen how small newspapers are these days?

5. Sports Administrator.  This is one hypothetical that was actual.  In those years after Princeton and before Asbury Seminary, I had a job with the US Tennis Association (surprise!).  The task involved using the proceeds from the US Open Championships to expand the base of recreational tennis in the USA, including the Special Olympics movement.  To do that, of course, we needed a guide book on how to teach the sport.  The product is below, an effort that might not be as creative as Crash Test Dummies but was every bit as rewarding.

As I  look over the list of coulda, woulda, shouldas, I suppose I’m grateful not for what might have been, but for what actually was.  And is.

Paul says it and now I know it:  woe to me if I do not preach the Gospel. 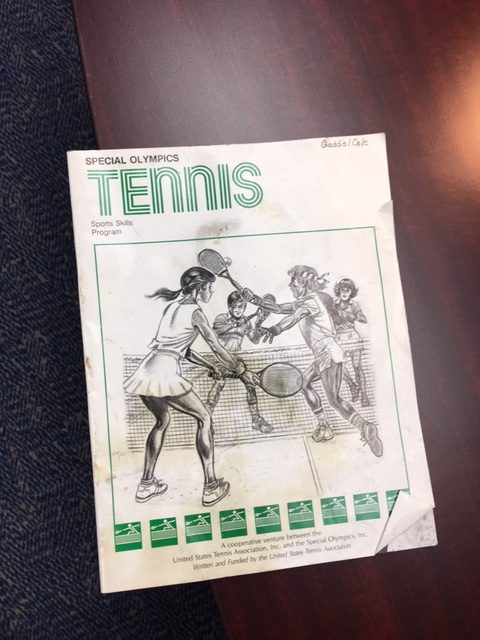