But I am Texan.

It’s hard to understand if you’re not from there, but if you are you know what I mean: it’s always home.

So I was excited to travel there this past weekend with my 18 year old son Riley in order to look at two prospective colleges, the University of Texas and SMU. We flew to Austin, stayed with family, visited the University of Texas, drove to Dallas, toured SMU and attended the SMU-TCU game, hurried back to Austin for the UT-UCLA game on Saturday before catching a flight home on Sunday.

I hit the Wall about midday on Saturday. But it was all worth it.

Here are the top five things about this Texas weekend:

5. Extended time with Riley. A dad would be a fool to take that for granted.

4. T-shirts for sale in Dallas that said: “Keep Dallas Normal.” Here’s the background on that one. For years, much of Austin has been a land that held on to the 60s as hard as it could. Sort of the Haight-Ashbury of the southwest. Its semi-official slogan — seen on shirts and bumper stickers everywhere — is “Keep Austin Weird.” They’ve succeeded. Dallas’ new shirts are its impassioned plea to stay far from the Austin vibe. They’re succeeding as well.

3. Taking a picture of the house I grew up in. The block that seemed so long and imposing as a six year old now seems small and manageable.

2. UT-UCLA on Saturday. It’s the kind of spectacle you have to experience to understand. 101,000 people in Darrell Royal stadium, 95,000 of whom wore burnt orange t-shirts. The bands were loud, the fans rabid, and the food forgettable. 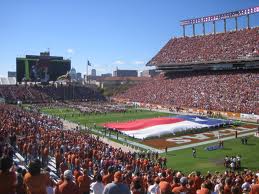 And when it became apparent that UCLA was going to pull off the upset — they did so in dominating fashion, 34-12 — I went through some secret delight. Because the last time I’d been in that stadium was as a six year old boy, desperately longing for visiting SMU to knock off the favored Longhorns. They didn’t (38-14, I think)and I was devastated. Revenge was delayed, indirect, but still sweet . . .

1. . . . which explains my top moment, the time at SMU. My dad was on the law faculty there for from 1947-1977 and much of our lives centered on the school. That campus is still gorgeous. The people are still enthusiastic. And the football team still lost — though they played TCU tough, leading briefly in the second half. Seeing Riley wear one of the shirts with this logo on it

is one of those moments you have to be a Davis to appreciate.

So where will Riley end up at college? We don’t know . . . but probably closer to our Carolinas home than either of the schools in Texas.

But every once in awhile you can in fact go home again.