I recently read David Hepworth’s Never A Dull Moment, a book that confirmed what I’d long felt but never articulated:  1971 was the greatest year in the history of recorded music. 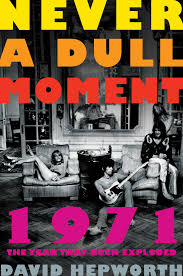 Hepworth goes through that seminal year month by month, artist by artist, and release by release.  In a year featuring albums like Carol King’s Tapestry and Led Zeppelin IV,  he singles out The Who’s Baby O’Riley as the one tune that epitomizes the year’s commitment to power, spontaneity, and innovation.

(Full disclosure: in 1971, I was 10 and more interested in my newfound ability to win tennis trophies that in keeping up with rock music releases.  Yet the year’s power is evident in the songs that “got” me years after their release.)

Here are my top five songs released in 1971:

5.  I’ve Seen All Good People, by Yes.  Sometimes bands take themselves so seriously that we cease taking them seriously ourselves.  That has been Yes’s plight. Yet the opening a capella makes this an under-rated and unforgettable track.

4.  Can’t You Hear Me Knockin’ by the Rolling Stones.  Not a mega-hit (see #2, below), but one of the most hypnotic sax performances in rock.  (Confession, I actually like track #6 on the Sticky Fingers album better . . . but this is a preacher’s blog and I can’t post the song’s name.)

3.  Baba O’Riley by the Who.  Well, for the longest time I thought the song was called Teenage Wasteland.  And it contains the line “I don’t need to be forgiven,” which the singer will discover sooner or later is absolutely NOT true.  And the song was the topic of the first car-ride conversation that I ever had with Julie in 1981.  But finally . . . it just sounds awesome.

2.  Brown Sugar by the Rolling Stones.  Not very politically correct.  But when the opening electric riff gets joined by acoustic support, the result is sublime in its nastiness.  Or nasty in its sublimity.

1. Stairway To Heaven by Led Zeppelin.  Yes, it’s become a cliché.  But that shouldn’t prevent even those of us who are tired of listening to it from appreciation both its ambition and its execution.