For Christmas this past year, Julie got us two tickets to School Of Rock The Musical, a Broadway-caliber production based on the 2003 movie starring Jack Black. 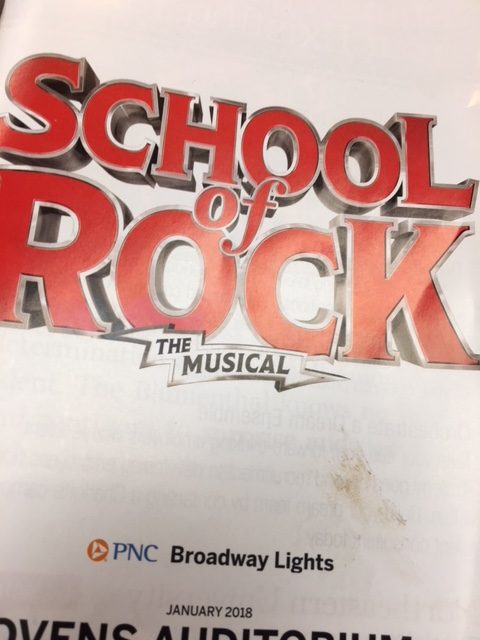 The performance was last Saturday, and so Julie and headed up to Ovens Auditorium to enjoy the show.  Since it was Saturday night, and I was preaching on Sunday, I warned her:  “if it’s at all boring, we’ll leave during intermission.”ids

Uh, no worries on that score.  The show was fabulous and we stayed til the very end. Here are five reasons why:

1. The Kids Are Alright.  The majority of the cast was under 13, and yet they played their instruments live.  Flawlessly.  With a bona fide rock sensibility.

2. The Musical was even funnier than the movie.  Favorite line:  “What makes you really mad?”  “When my mom gets too much Botox and I can’t tell if she’s happy or sad.”

3. The audience was just like me … Ovens was filled with Boomers from the burbs.

4. “Amazing Grace” made a well-deserved appearance.  Late in the play, the class wallflower asks to join the band.  Told she can be a back up singer, she replies, “I don’t want to sing back up.  I want to sing.”  And so she does, a gorgeous a capella version of the hymn.

5. A dilemma in the show’s signature song.  Like the  movie, the musical highlight was “Stick It To The Man.”  Witty and irreverent, it shows rock music at its raucous, rebellious best.  What authority limits, rock liberates.  And yet I’m not sure the songwriters or performers note the irony inherent in the song:  every band has a MAN — one who is in charge — and in this case it’s the guy unwittingly teaching his minions to stick it to … himself.  Maybe now we know why so few rock bands stay together for long periods of time.  Here’s the song and note the tension: