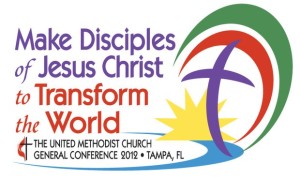 The gathering of 1,000 or so delegates from around the world began on April 24 and will conclude on Friday, May 4.

This body is the only one who can speak officially for the entire denomination.

Live streaming of the proceedings is available at www.umc.org. As a result, I’ve checked in periodically over the last week to see how the Conference conducts its worship, orders its debates, and makes its legislative decisions.

This year, delegates have had to wrestle with issues endemic to a shrinking denomination with declining resources: 1) how to minimize bureaucracy without losing mission; 2) how to deploy pastors strategically without enabling those who are no longer effective at ministry; and 3) how to harness the leadership abilities of the bishops of the church without giving them carte blanche over the entire system.

In addition, the General Conference will (eventually) vote on proposals regarding our denomination’s stand on homosexuality . . . an issue that has arisen every four years since 1972 and one on which global Methodists have consistently sided with historic Christian orthodoxy:  celibacy in singleness and faithfulness in heterosexual marriage.  I believe this year’s conference will make the same decision.

In any event, here are my top five reflections from occasional live streaming . . .

1.  I’m so glad I’m not there.  Now: I wish I had been elected as a delegate.  I wasn’t. Only 13 pastors from Western North Carolina were elected by fellow clergy and I wasn’t among them.  However, as I watch the endless debates over arcane procedural details — motions, counter-motions, amendments, re-amendments — I realize I simply don’t have the patience for ten days of that kind of activity.

2.  When traditional Methodists try to do contemporary worship, it’s awkward.  The worship moments I have seen have been full of pageantry, metaphor, and planning.  Yet it’s obvious they are trying to do two things at once: be cutting edge and historically Methodist.  As a result, it’s not the seamless, unified kind of experience you’d get at a Northpoint Church in Atlanta or Forest Hill Church here in Charlotte.  Sometimes it feels as if the Conference is trying to serve a hamburger at Chick Fil A.

3.  The international flavor saves us.  While United Methodism is declining in the United States, it is growing rapidly in both Africa and Asia.  Both those regions tend to be more orthodox in theology and yet flexible in worship stye than their American counterparts.  So our international delegates do much to ensure that we as a people stay faithful to the Scripture that shapes us.  (Sometimes they have been heard to ask:  You Westerners brought us the bible many years ago . . . why don’t you believe it anymore?)

4.  The live Twitter and Facebook feeds are more interesting than the proceedings themselves.  Check it out here and you’ll see what I mean.

5.  The delegates have a thankless job.  Emotions run so high on every issue — homosexuality chief among them — that regardless of how they vote, Conference delegates will make some new enemies.  Beyond that, the grueling schedule and heavy focus on detailed legislation take a heavy toll on both mind and body.  While the event may be in the Sunshine State this year, it’s no vacation at all.