Julie and I spent last week in Hilton Head Island, SC.  We had a couple of days alone and then were joined by our children and their spouses for the bulk of the week.  Here we are: 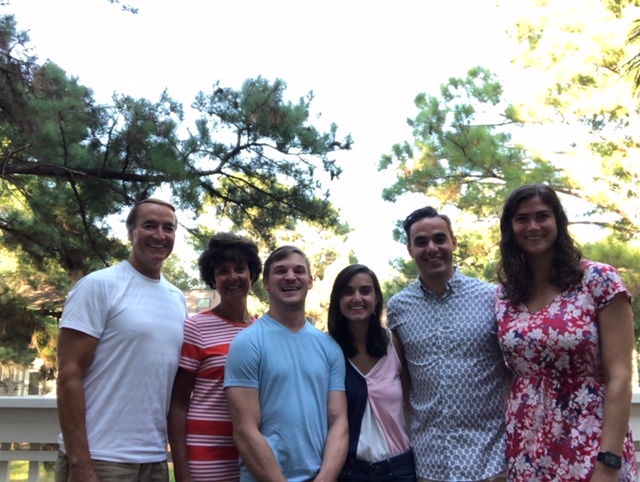 One. Between 1997 and 2013, the four of us spent one week every summer at the same vacation spot in Hilton Head — Palmetto Dunes.  Once you find something you like, stick with it!  The only reason we tried something new in 2014 is that it was our 30th wedding anniversary, so we splurged.  And still brought out kids.

Two.  For those seventeen years, we did the same things on the same days (for example, Vacation Tuesday was always “Fuddrucker’s” night (til it closed) and Vacation Wednesday was always miniature golf night.  Does that strike you as slightly … OCD?  Well, when I read it in print like this, it does that for me as well!  Except … when our children recall their childhoods and the memories that give them both hilarity and stability, it always comes back around to some tradition established at Hilton Head.

Three. Bringing in-laws into long established family traditions requires in-laws with patience, humor, or both.  Fortunately, we got both in both.

Four. A vacation in the Covid-era is a bit more subdued than other years.  Much masking, little dine in eating, and a sadly strange suspicion of getting too close to people you don’t know.  I long for the day when THIS is “just” a memory.

Five. Recalling old memories doesn’t prevent making new ones.  The most impressive one this year?  The alligator that swam up the lagoon behind our unit and made a bee-line for daughter-in-law Natalie.  When she moved, he did.  Fortunately when she moved inside, he stayed in the water.

Six.  Personally, the Word before the world continues to make a “world” of difference.  Back in the day, when we’d go on vacation, I’d essentially take a break from devotional life.  Not anymore.  I decided that even while away, I could start the day in the Word and not the world and the accountability of providing Reading Prompts to ensure I did it.  Did that get in the way of vacation?  Nope.  It made it all the more refreshing.