I spent the early part of last week in a remarkable place called the Ceta Canyon Retreat Center – www.cetacanyon.org – leading a retreat for United Methodist Clergy of the Northwest Texas Annual Conference.

What is the Northwest Texas Annual Conference? 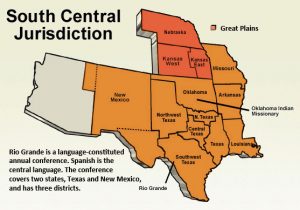 Great question! It’s a collection of 201 churches located primarily in what we native Texans refer to the “panhandle” of the states. By comparison, the Western North Carolina Annual Conference, of which I am a member, has over 1100 churches. The geography of the region is primarily rural, with ranching and oil as the dominant businesses, and the three largest cities are Amarillo, Lubbock, and Abilene. The Ceta Canyon center is located between Amarillo and Lubbock.

The Conference has also long been known for its almost direct line to Asbury Seminary, so in accepting the invitation, I knew I’d be surrounded by people with similar understandings of biblical authority, Jesus’ divinity, and, yes, human sexuality.

Here are five random (or designed; take your pick) reflections on the week:

1. It was actually the second time in my life I’d flown into the Amarillo Airport. The first time was in January of 1980, when as a high school senior, I flew out to play in an indoor, professional tennis tournament. I remember the pilot welcoming us to Amarillo with the chilling announcement: “Welcome. It’s EIGHT degrees outside.” (See what I did there?) Anyway, I arrived at the tournament full of confidence, on top of my game, and sure that this was one of several preludes to high level college tennis in Texas and then a career on the pro tour. I left having lost in the FIRST ROUND to a very good player from TCU and my future plans very much in doubt. I remember thinking, “if I can’t make a mark in this smaller tournament in Amarillo, how do I have a future in the big leagues?” My game and confidence took several months to recover, and in that time I decided to opt for a college experience more focused on academics than athletics … but in retrospect, the college I chose (and the path I abandoned) set up the rest of my life – meeting Julie, majoring in English & learning to write, and hearing a call to ministry.

All that nostalgia from my first flight to Amarillo made me wonder if this second flight to the same city was a full circle exercise. If that first trip helped me see what I wasn’t supposed to do, this one confirmed what I very much love to do. I say that because …

2. I led the forty or so Northwest Texas pastors in an expanded version of a Simplify The Message workshop. Topics included:

The band leading us in worship excelled, the pastors engaged, and all in all I have seldom felt more at home in a place I’d never been or among people I’d never met. I quickly saw why the NW Texas Conference, though small in comparison to places like Western North Carolina, understands itself as a family. A family that welcomed me in.

3. History Lessons Remain Vital. Several of the attendees were recent college graduates shoring up their ministry skills. And, as conversations tend to, I had one with them that turned to college sport. To my utter horror, these native Texans had never heard of the late, great Southwest Conference. They assumed that the University of Texas and nearby Texas Tech had always been in the Big 12 (defense optional) and that Texas A&M had always been in the Southeastern Conference. And, worst of all, they assumed that the little privates like Rice and SMU had always been mired in mid-major conference mediocrity. So I took it as my God-given responsibility to give a quick tour of football history, including SMU’s Sisyphus-like efforts against Texas and Arkansas as well as the all-too-brief but especially glorious season known as The Pony Express.

4. An Ab Roller In Your Carry On Will Get A Double Check From TSA. Just in case you’re thinking of bringing one on with you. You’re welcome.

5. Northwest Texas is FLAT … until it’s not. The drive from Amarillo to Ceta Canyon was about what you’d expect – miles and miles of unchanging landscape. Inside the Canyon, however, everything changes. It’s a place of stark beauty, highlighted by an unexpected waterfall (yes, I hiked there) and geological lessons embedded in the layers of rock. Ceta Canyon is itself adjacent to Palo Duro Canyon which I found out is THE SECOND LARGEST CANYON IN THE USA (I will give three guesses to what Canyon is #1, and the first two don’t count.)

All in all, I left Northwest Texas hoping that my second flight into Amarillo would not be my last.