I spent three days last week in Indianapolis for the 2017 meeting of the Indiana Annual Conference of the United Methodist Church.

The Indiana chapter of the Confessing Movement invited me to give a couple of talks and then the good folks at Cokesbury arranged two different book signing sessions.  (Every Annual Conference meeting around the country has a mobile Cokesbury bookstore set up within it.)

I had been to Indianapolis a couple of times during the 1980s when I worked for the USTA. Beyond that, I had associated the state with the Colts, John Mellencamp, and the movie Hoosiers.

Here are my top five reflections from my time away:

1.It was a great opportunity to turn digital friends into personal ones.  I have known John Meunier since the earliest days of this blog, way back in 2008.  In the intervening nine years, we have corresponded, commiserated, and conspired — not to mention hyperlinked, “liked” and retweeted.  Yet we had never met until this past week.  It’s always good when the virtual becomes three dimensional: 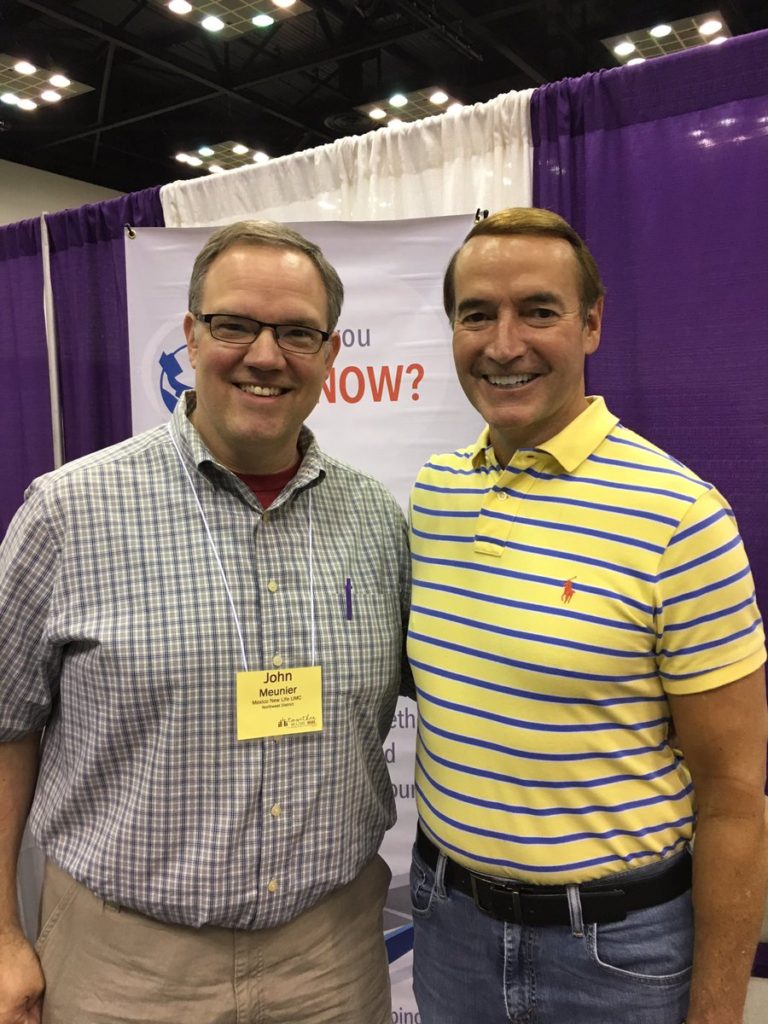 2.The people of Indiana REALLY like their steak.  Downtown Indianapolis is lined with steakhouse after steakhouse.  And these aren’t budget places, either.  Now I know how to answer the where’s the beef? question: in the Hoosier state.

3. United Methodists like hearing the Bless This House story.  As part of the United Methodist ordination service, clergy-to-be are asked, “Will you visit house to house?”   Bless This House is one way we’ve answered that question affirmatively at Good Shepherd — it’s our high touch, low threat door knocking ministry that has fueled the church’s growth through the years.  I told the story, shared our tools, and even distributed the “script” we use … and the Indiana United Methodists were eager to scoop it all up.

4. You sell more books when you speak first.  This was the first time outside of Good Shepherd that a book signing was coupled with public speaking.  The notoriety you get from yacking increases the attention people pay to your writing. I’d say that the folks were most drawn to The Storm Before The Calm, primarily because they found the title provocative.

5. Western North Carolina Methodists have a treasure.  This Annual Conference met in the Indiana Convention Center, which is modern, convenient, spacious, and … soul-less.  When we in Western North Carolina meet (third week in June), we do so at the Lake Junaluska Retreat & Conference Center which is older, inconvenient, cramped, and … utterly charming.  Our gathering has a sense of nostalgia, worship, and spirit that is virtually impossible to manufacture in a downtown convention center.

Wait … whose that guy officiating that Lake Junaluska wedding?