So last Friday, Julie and I had second row seats at John Mellencamp’s concert at Ovens Auditorium.

We had seen him back in 1999 at er PNC Music Pavilion in north Charlotte.  We thoroughly enjoyed that show and when we stumbled onto these extraordinary seats this year, we knew that proximity to the artist would add to the memories of the evening.

We were so close, in fact, that I could smell the nicotine from Mellancamp’s obligatory cigarette that he smoked mid-way through the show.  Other than that, the seats were a blast.

And here are my Top Five Reflections from the show: 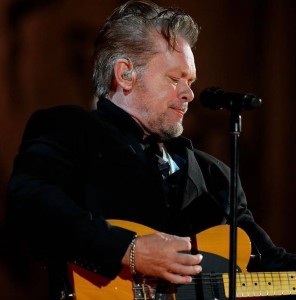 1. He has made a lot of great songs.  How’s that for a “plain spoken” truth?  It’s easy to overlook just how many good songs he has made from the early 80s until today.  On Friday night, for example, we heard “Small Town,” “Little Pink Houses,” “Jack & Diane,” “Paper In Fire,” “Cherry Bomb,” “Human Wheels,” “Longest Days,”  and my favorite, “The Authority Song.”  He has so many good songs that some of his best known got left out:  “Peaceful World” and “Wild Night” were two of the three that I most wanted to hear but didn’t (#3 is in #5 below).  He is also secure enough in his legacy to reinvent his biggest hits — he performed Jack & Diane with no backing band behind; just Mellencamp, his acoustic guitar, and a story of . . . well, you know what the song is a story of.

2. He pretends he’s half redneck and half male chauvinist, but he’s really all poet.  In spite of gravelly image, Mellencamp has the ability to turn phrases matched by few in rock.  Among the best of the evening was from “Longest Days”:  “life is short even on its longest days.”  So it is.

3. He makes it seems like the violin and accordion have ALWAYS been staple instruments in a rock band. Take almost any song Mellencamp sings and SUBTRACT those two instruments, and it simply wouldn’t be the same. 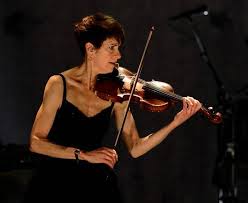 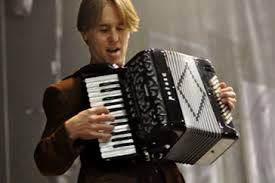 4. People take photos with phones.  Even when the star of the show gave a single fingered peace sign to one would-be photographer, people — most of whom were my age — keep streaming forward to snap a picture.  Or better, a selfie with Mellencamp in the background.  I resisted the temptation.

5. I was probably the only person in the room who wanted fewer of his old hits and more of his new material.  His Cuttin Heads CD from 2001 is simply terrific — highlighted by “Peaceful World” and “Crazy Island” — and then his current Plain Spoken release is an unexpected delight.  I harbored a secret hope that he’d play the whole CD (this is called the Plain Spoken tour, after all), but instead he played only a couple of selections.  In contrast to Jack & Diane, I was the only one singing along to the new songs.  Oh well.  The best song from Plain Spoken that he didn’t do is called Sometimes There’s God, the kind of tune we could have used in church during 2014’s The Shadow Of A Doubt series . . . but the album hadn’t dropped yet.  (Did you notice how I just said “dropped” in referring to an album?)  Anyway, here’s Sometimes There’s God, and here’s to hoping he plays it next time: