Last month, I posted about my experience at a Led Zeppelin cover band concert.  You can read all about the “soundtrack of my youth” here.

Well, a happy consequence of going to that concert was free tickets to this past weekend’s show by On The Border, a Charlotte-based Eagles tribute band. 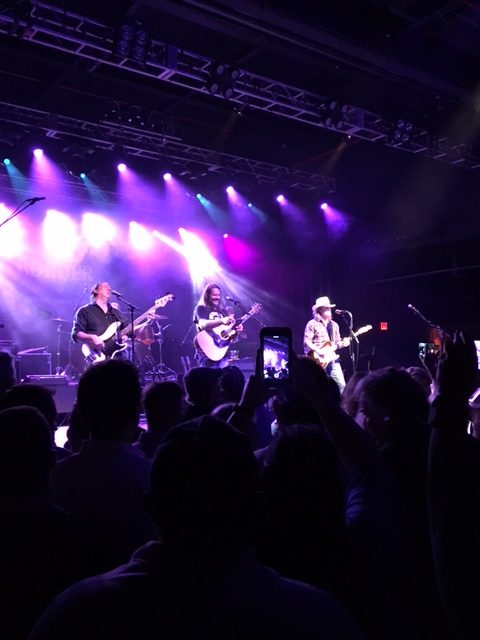 Which, then, is really the soundtrack of my youth — the Eagles or Led Zeppelin?  Yes.

So what are my top five takeaways from yet another band taking me down memory lane?  Here goes:

1.The band’s name comes from one of the Eagles’ most under-rated and under-played tracks.  They came onto the stage with a recording of “On The Border” blasting through the speakers, but did not play it live.  Here it is — and for those of you who either were not born yet or do not remember 1973, the “don’t you tell me about your law and order” is a poke in the eye at then President Richard Nixon.

2. The audience.  Oh, the audience.  There were roughly 2,000 people jammed into the Fillmore in Charlotte.  And … you know how Good Shepherd is a full color church?  Well, this weren’t no full color crowd.  We were almost all a whiter shade of pale.  And older.  In fact, I thought I heard some people sharing colonoscopy stories while putting on their reading glasses to check their iPhones.

Happily, this older, whiter crowd still found time to join in the best sing-along of the night: the “so put me on a high way and show me a sign” chorus to my favorite Eagles’ song of them all, “Take It To The Limit.”

3. The wrong solo artist.  On several occasions, I thought that I had actually wandered into a Joe Walsh tribute band show.  Seems To Me, Funk 49, Rocky Mountain Way, In The City, and Life’s Been Good all got full treatment — and, I should add, all received genuine applause & appreciation.  But . . . doesn’t everyone know which Eagle had by far the best solo career?  All we got was ONE Don Henley song — and it was Dirty Laundry, hardly on the same level as Boys Of Summer or The Heart Of The Matter.

Since I didn’t get to hear On The Border do Boys Of Summer, how about KT Tunstall’s version?

4. The devil really DOES have all the good music.  Well, sorta.  I have to say that On The Border’s best tributes were to Witchy Woman and One Of These Nights (in which the singer is “searching for the daughter of the devil himself.”)  Hey — at least I got up and went to church the next morning.  You can hear a bit of “One Of These Nights” at :47 here:

5. The memories.  I knew every word, every song, every note, every fill.  From Take It Easy at the open to Life In The Fast Line at the conclusion, On The Border played them faithfully and played them well. At the close I really was able to hold on to 16 as long as I could.  What’s next?  A Rolling Stones cover band show?  Oh, that’s right.  They’re still playing.