On Sunday night, I drove thirty-seven miles due south to preach at the Annual Chester, SC (pop. 5,607) Ministerial Association Revival.

Chester’s First Baptist Church hosted the event, and if my memory is working right, it marked the first time I have ever spoken publicly at a SBC church.

Here are some of the worshippers gathering together in the moments before the service began. 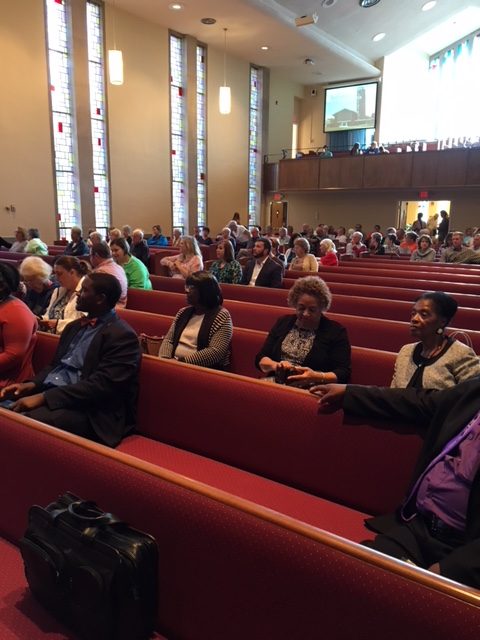 And here are five reflections from an evening in Chester:

1. That pulpit was HIGH.  As you can tell, the sanctuary has a stained-glass & red-carpeted traditional feel to it. And that feel includes an elevated pulpit.  Way elevated.  I preached behind it, and not alongside a rolling table — yes, it can’t be done.  So while I felt like that height gave me some authority, it also created some distance from the congregants.  No worries on that score, though, because …

2.  The music was refreshing & the camaraderie was strong.  The diversity in  music styles — ranging from traditional to Gospel to modern — reflected the diversity in the room.  Organizers told me that a few years ago the event was all white, but Chester’s pastors have made purposeful efforts to let the walls fall down.  Amen.

3. The people of Chester like to read.  At the end of the service, I set up a book table in the lobby (or narthex or vestibule) and sold copies of The Storm Before The Calm.  Once I told people that each chapter was originally a sermon much like the one they’d just heard, they gobbled them up.  I even sold the one copy I had of Crash Test Dummies to a woman who owns the only Christian book store in town.  #ShelfSpace

4. People love the Good Shepherd story.  Towards the end of my talk, I mentioned how Good Shepherd has a mix of 40 nations, multiple ethnicities, Red Staters & Blue Staters, all gathered together to glory at the foot of the cross and to gaze at the empty tomb.  I then confessed to them that I am WHITE, went to WHITE schools, played a WHITE sport (tennis) growing up, and so there is no other way such a congregation could be crafted together BUT GOD.  I also reminded them that diversity is never the goal; it’s always the result.  The goal remains a living relationship with Jesus Christ.

5. It helps to know the venue.  I drove down thinking that I was preaching the first night of a revival while other pastors would speak the next two.  Nope.  It was a ONE NIGHT REVIVAL … meaning it all hinged on me!  Actually it never hinges on me or any other preacher but on the One who made the hinges in the first place.