My delight with those results got me thinking: why am I such a fan?  I didn’t go there for college.  SMU even has a seminary called the Perkins School Of Theology, and I didn’t go there either.  So what explains my lifelong yet almost irrational fandom for the Mustangs?  Here are five reasons:

Five.  The M.  Huh?  Well, it doesn’t stand for Southern Mormon University, does it?  It’s Southern Methodist.  How could I not root for our fellow Methodists on the biggest stage?  After all, neither Asbury Universiry nor Asbury Seminary have EVER fielded a football team.

Four.  Nostalgia.  As a lot of you know, my father was on the law faculty at SMU.  We lived in walking distance from the campus.  I grew up going to football games at the Cotton Bowl, basketball games at Moody Coliseum, and even occasional tennis matches at what was then called Haggar Courts (I think that was the name).

Three.  Virtue.  My parents and most of my (much) older brothers and sisters always told me that SMU was good and the big meanies from public schools like the University of Texas and Texas A&M were sketchy.  In fact, in the days of the late, great Southwest Conference, all the little private schools — SMU, TCU, Baylor, and Rice — occupied the moral high ground while the publics like the ones mentioned above as well as Texas Tech and Arkansas wallowed in the mire.  (See what I did there?  Arkansas?  The Razorbacks?  That’s what they do — wallow in mire.)  I acknowledge there is really no logic to the “virtue” vs. “mire” thinking, but that’s how I understood it as a six year old.

Two.  Sisyphus.  Remember him?  Always pushing the rock up the hill, all day, every day, and never reaching his goal.  Well, you have to have a lot of patience to be an SMU fan.  Sure there was that Final Four … in 1957.  And that National Championship in football … in 1935.  Even its greatest gridiron team in 1982 was robbed of another Natty just because they tied Arkansas one time while Penn State (another un-virtuous public school) lost a regular season game but beat Georgia in the Sugar Bowl and the voters felt bad for Joe Pa and so awarded them the title.  “We” were the only undefeated team that year, so I’m claiming it.

One. Logo. SMU always, always, always has the best uniforms with the freshest colors and the coolest logo.  Here it is.  The helmet is even better when it is red and the mustang is white. 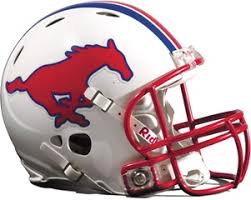