I once attended a church where one of the pastors suffered larynx damage that slowly but surely robbed him of his voice.

A preacher without a voice is like a car without a gas pedal. Doesn’t work.

Which gets me thinking . . . who are some preachers with voices of clarity, depth, resonance, and conviction? Even apart from the content they deliver, what five preachers could I listen to again and again simply to hear their voices?

5. Tony Evans. Dr. Evans doesn’t have a classic, resonant voice, yet something in his his vocal variation is unmistakable. Combine that with an unparalleled gift for analogy and solid theology, and you’ve got #5 on my list of favorite pastoral voices.

4. Ellsworth Kalas. Dr. Kalas served as a highly-regarded Methodist pastor in Ohio before joining the faculty of Asbury Seminary in the 1990s. Thankfully, he taught homiletics and hundreds of Asburians sat at his feet, learning his tools of the trade. I don’t know if he could “teach” his voice, though. Kalas led Asbury through as interim president through a tumultuous time from 2007-2009, and though he is well into his 80s still preaches with conviction and vigor. You can listen to him here.

2. Howard Olds. In the late 1980s, Howard served as pastor of Trinity Hill UMC in Lexington, Kentucky, and so was our pastor during my first year in seminary. He is still the best preacher I’ve heard, week in and week out. His heart-tugging content would come alive through his Kentucky-accented bass delivery. Howard’s ministry career concluded at Brentwood UMC in Nashville, where he preached until his death from cancer in 2008. You can listen to Howard’s sermons and radio spots here. 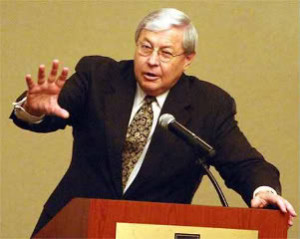 1. Chuck Swindoll I first heard Swindoll’s “Insights For Living” radio broadcasts in the early 1990s. I must admit that this thought crossed my mind: “If I could take steroids and get that kind of gravelly bass, I might just do it!” Anyway. Through his leadership of Fullerton First Evangelical Free Church in California, Dallas Theological Seminary in (surprise) Dallas, and now at Stonebriar Community Church in Frisco, Texas, Swindoll is one of those preachers of whom I often pray, “Lord, thank you for making a man like him. He helps me believe more.” I believe the deep pitch of his voice comes from the deep strength of his faith.