Some thoughts I shared about Wimbledon in the space before . . . 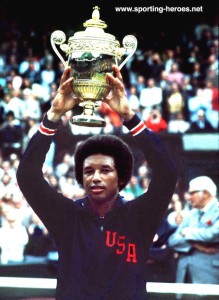 And for the last 24 years, I haven’t been able to watch a men’s final as those matches are played when I’m working. Sunday morning.

Nevertheless, like any tennis serious tennis player and fan, Wimbledon still holds a mystique for me.

1. Arthur Ashe upsets Jimmy Connors to win in 1975. It’s maybe the best “where were you when?” question in the tennis world. Where were you when you heard that Arthur Ashe had beaten a seemingly invincible Jimmy Connors to win it all in 1975? I was playing in the Waco (TX) Open, 14-and-under division, and the announcement came over the louspeakers: Arthur Ashe beat Jimmy Connors 6-1, 6-1, 5-7, 6-4. All the players were stunned. I found out later that Ashe abandoned his customary slash-and-burn power tennis to confound Connors with dinks and slices. I own a DVD of the match, pull it out from time to time, and never fail to register a large smile as I watch match point: Ashe slices a nasty serve in the deuce court to Connors’ backhand and then puts away the weak reply into the open space. Nice guys can finish first after all. 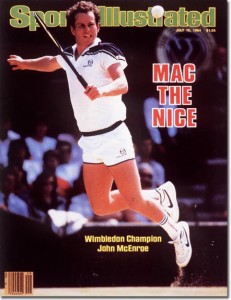 2. John McEnroe defeats Jimmy Connors in the 1984 finals 6-1, 6-1, 6-2. Julie and I were newly married, I wasn’t preaching yet, and so we fixed a breakfast of strawberries and cream and settled down to watch the match. What we saw was simply the best display of tennis I’ve ever seen anyone play. McEnroe hit upwards of 80% of his first serves in, made only four errors in the three sets, and managed to make Connors look like a beginner. It was utterly, artfully, brilliant. 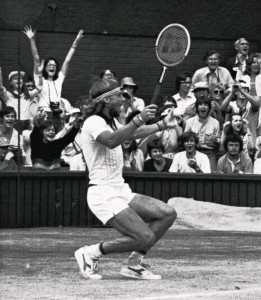 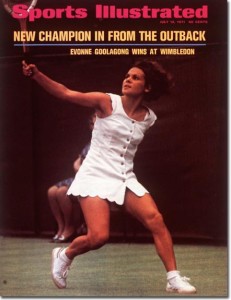 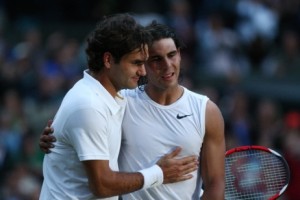 6.  Roger Federer wins his first in 2003 and cries like a baby.  I don’t believe any of us thought there would be six more titles after this one (and counting?!), but this is my all time favorite acceptance speech.