With the death earlier this year of Eagles’ co-founder Glenn Frey, Rolling Stone magazine just released a Special Edition, Ultimate Guide about the band.  The cover promised two pieces that I simply couldn’t pass up:  1) Don Henley on the making of every album and 2) Their 40 Greatest Songs.  As you might suspect, I was eager to read the former yet raced to read the latter. 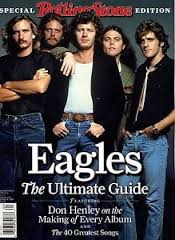 So here are some things I learned from an entire Rolling Stone dedicated to my first-est, favorite-est band:

1. The late Mr. Frey’s favorite Eagles’ song was “One Of These Nights.”

2. “New Kid In Town” may or may not have been about Bruce Springsteen.  (Whoever the subject, it still has one of my favorite lyrics ever:  “they’ll never forget you til somebody new comes along.”)

3. Guitarist Don Felder wrote “Victim Of Love” and thought he would be the one to sing it . . . until the rest of the band recorded Don Henley singing it behind Felder’s back.  As soon as Felder heard the Henley-led song, he knew the gig was up . . . and the song was good.

5. The Top 40 is a mix of obvious selections and painful misses.  Among the obvious:  Hotel California as #1 & Take It Easy as #2.  Among the misses:  The Last Resort at #27.  Twenty-seven?  The little blurb on the song revealed that album producer Bill Szymczyk (Can I buy a vowel, please?) felt its power rivaled Hotel California itself.  Well, yeah.  So rank it up there!  Another miss:  Take To The Limit at #15, behind I Can’t Tell You Why.  A final miss:  overlooked and underrated On The Border at #19, well behind the God-awful Heartache Tonight (#10).  For what it’s worth — and since it’s Tuesday — here are my Top Five Eagles Songs:

1.  Take It To The Limit.  Have you heard Randy Meisner’s falsetto live?  Well, here ya go:

3.  The Last Resort (and not just because of Producer-Guy-In-Need-Of-A-Vowel Szymczk).  If you’re not familiar with here, here it is:

4.  On The Border.  How can you not love a song with a “you in some trouble boy” break in?

5.  One Of These Nights  Glenn Frey was on to something.