Have you noticed people want you to take a stand these days?

To make your decision, your position, your viewpoint known.

And in thinking on these things I’ve realized that there are some topics on which I won’t compromise.  In some cases, it’s because I fancy myself an expert on the subject.  In others, it’s due to the passion I feel towards the subject.  And in still others, it’s because I believe both the foundation and the future of the Christian faith are at stake.

So here are my top five hills:

1.The literal, bodily resurrection of Jesus from the dead.  What does Paul say about it in I Corinthians 15?

14 And if Christ has not been raised, our preaching is useless and so is your faith …

17 And if Christ has not been raised, your faith is futile; you are still in your sins. 18 Then those also who have fallen asleep in Christ are lost. 19 If only for this life we have hope in Christ, we are of all people most to be pitied.

20 But Christ has indeed been raised from the dead, the firstfruits of those who have fallen asleep.

So the Christian faith is literally pointless without the resurrection and in turn it all points to the resurrection of those who die in Christ.  His resurrection was neither fable, nor metaphor, nor mystical experience in the lives of some bug-eyed disciples; it was and is world altering fact.

2.Jesus alone, not Jesus among.  As I’ve heard it said, “Jesus is not one of many.  He is the one and only.”  Whatever truth and beauty we find in other religions and faith systems, every knee will ultimately bow and every tongue will ultimately confess that the risen Jesus is the returning Lord.  The only question is whether we will be in practice at that time or not.

3.The authority and inspiration of the Scriptures.  I’d actually argue that the inspiration is the deepest when the inconvenience is the greatest.

4. The reality of heaven and hell.  I have neither the wisdom to determine who goes where nor the power to carry it out, but I believe God does and God will.  With Methodists always and everywhere, I’m sent to call people to “flee the wrath to come.”

5.  The historic, global Christian understanding of sexuality.  A generation ago, I wouldn’t have thought this was a hill to die on because the consensus around it in the United Methodist Church was so great.  Not anymore.  But I’ll stand on the hill with the giants of antiquity and our international siblings in affirming the blessing boundary God has establish for sexual intimacy: celibacy in singleness and faithfulness in heterosexual marriage.  If we think we’re the first ones to hold such counter-cultural views, try living as a Christian in first century Corinth.

6.  “Boys Of Summer” is the greatest rock song ever.  C’mon, we’ve spoken about resurrection, authority, eternity, and sexuality, it’s time for some levity.  Unless this one is the most serious of them all. 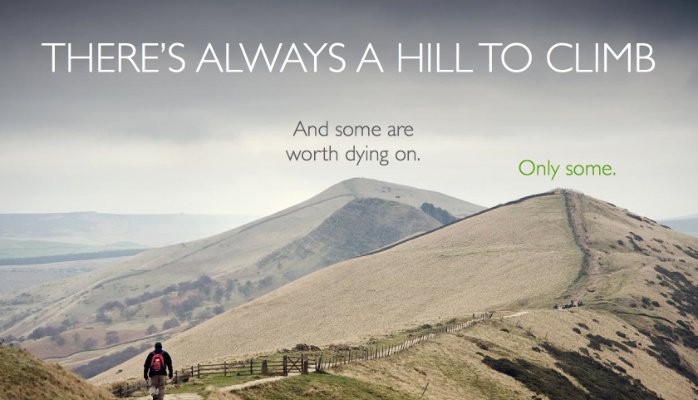 Among hills I’m not going to die on — meaning, I might well have strong opinions on the matter but I wouldn’t let disagreement cause division and I might even entertain the notion that I’m wrong — I would include:

How much water to use in baptism;

The best way to contain and eliminate ISIS;

Calvinisim vs. Arminianism (again, I’ve got STRONG opinions on that debate but I recognize Christianity would be lacking without its Calvinist branch);

End times.  While I am a committed amillennialist, I’ll talk to people who aren’t.  In fact, some of my best friends are dispensationalists.