I missed church on Sunday.  But I had a really good reason to do so.

Julie and I spent this weekend in Queens, New York, taking in two full days of the US Open tennis tournament.  With all the travelling Julie does for her job, both flights and accomodations were essentially free of charge (check perk of marrying well here).

Here I am in Arthur Ashe stadium just before play began on Saturday. 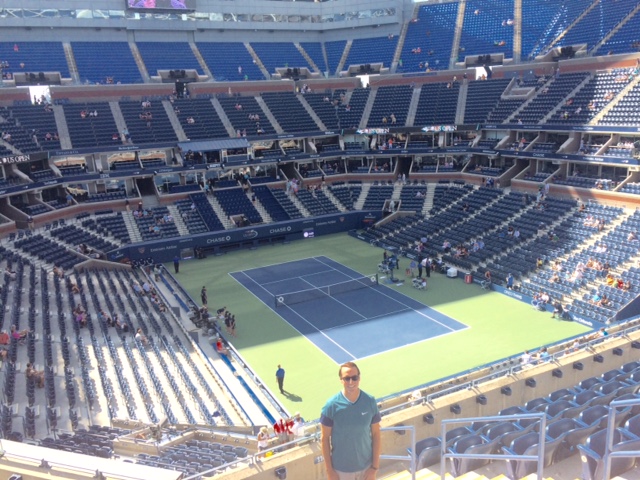 Talk about a “kid in a candy store” kind of weekend.  Here are the top five highlights:

1.  The USTA Billie Jean King National Tennis Center & Arthur Ashe Stadium.  Some of you may know that between 1985 & 1987 — just after college and just before seminary — I worked for the USTA, the not-for-profit organization that owns and operates the U.S. Open.  As such, I went to the Open at Flushing Meadows plenty of times in the mid-80s — the final time in 1986.  Well, the transformation of that locale in the 29 intervening years is nothing short of remarkable.  The U.S. Open might well be played on the same site but it is not at all the same venue.  What had been gritty, spartan, and utilitarian is now majestic, interactive, and stunning.  Terms like “overhaul” and “makeover” don’t do the transformation justice.  Best of all was an interactive exhibit called “The U.S. Open Of Tomorrow” which reveals that even greater changes loom in the next four years.

2.  Reunions.   All along, we planned to have weekend reunions with former colleagues from the USTA (who actually helped with tickets!), college tennis teammates, and even old friends from the days of playing competitive tennis in Texas in the 1970s.  Each in their own way proved to be reunions that I didn’t want to end. 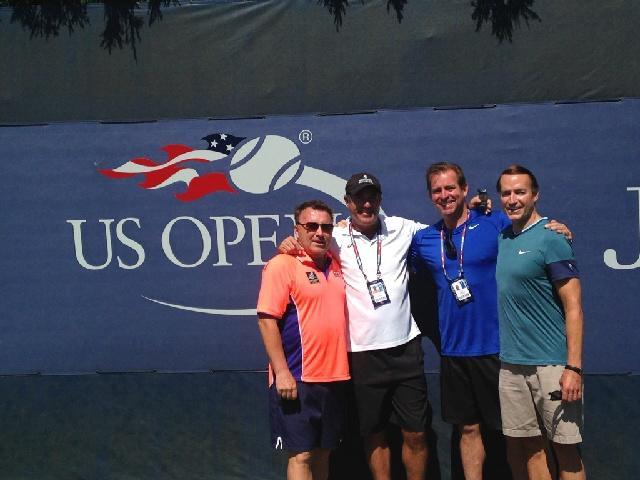 3.  Roger Federer, live.  I have watched and rooted for Federer on TV since his first Wimbledon in 2003.  But until this weekend, I’d never seen him play live.  Now I have — on Saturday, under a blazing sun, Julie and I watched him routine Philip Kohlschreiber 6-3, 6-4, 6-4.  Mark that off the bucket list.

4.  Kevin Anderson vs. Dominic Thiem, up close and personal.  As unforgettable as “Federer, Live” was, the real treat came a couple of hours later while watching a match between two players known only to serious tennis fans: 16th ranked Kevin Anderson and 20th ranked Dominic Thiem.  Why such a treat?  We watched this one from a ringside seat at Court 17, an intimate venue that seats about 3,000 fans.  And to watch the modern game at such close range was breathtaking.  The pace, spin, power, and timing of these two players was simply inconceivable — and I’ve grown up in the game & could actually play it fairly well back in the day.  The changes in technology, technique, and fitness all combine to make tennis in 2015 a fundamentally different sport from what it was back in 1980. 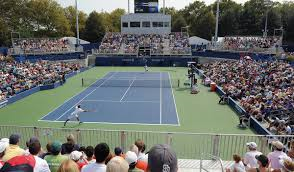 5.  Small World, Really Small World.  As we found our seats for the Saturday night session, I noticed that the man sitting next to us looked familiar.  I wracked my brain.  He was distinguished, well dressed, looking like he could be a Wall Street magnate.  I thought:  famous titan of industry?  Or maybe something closer to home:  well known preacher?  Even a bit of dread:  a United Methodist bishop?  Then I settled on it:  he must be a TV newscaster.  He just had that look.  So I decided not to bother him.  But as we got up to leave, I couldn’t resist:  “I’m sorry,” I said, “But have we met before?  Have I seen you on TV a bunch or do you work for a church?”  Sly smile on his face:  “Well, I do coach basketball.”  And then the clouds lifted and I stammered out, “Davidson!  McKillop!”  That’s who it was — Bob McKillop, head coach of Davidson’s NCAA basketball team.  He could not have been nicer, either that night at the stadium or the next morning as we took the same plane home.  But what are the odds that in a 23,000 seat tennis stadium in Queens, NY we get seats next to someone else from Mecklenburg County?  I didn’t think quickly enough to hand him a copy of The Shadow Of A Doubt, but as with all small world stories, there may well be a next time. 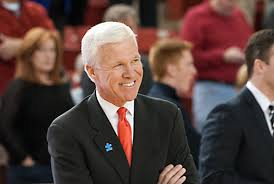