That’s the Wilmington in North Carolina, not the one in Delaware.

I have lived in this state for almost 28 years and yet I have never been to its coast.  Most of our beach trips in years gone by have been to the ones in South Carolina — which, paradoxically, are closer to our house in Charlotte than the NC beaches in places like Wilmington.

Here are five reflections from this trip:

1.On the drive over (east), I passed through my old stomping grounds in Monroe.  While speeding by, I noticed that a former United Methodist Church (which was alive and well during the 90s) is now closed and in its place is a congregation called Living Praise Ministries.  If that doesn’t set the stage for a Methodist preacher going to a Methodist church talking about rekindling our love for the Holy Spirit, nothing does.

2.The people of Pine Valley know how to welcome a guest pastor.  When I checked in to my hotel, there was a gift bag.  Better yet, the gift bag contained Baby Ruths.  Win. 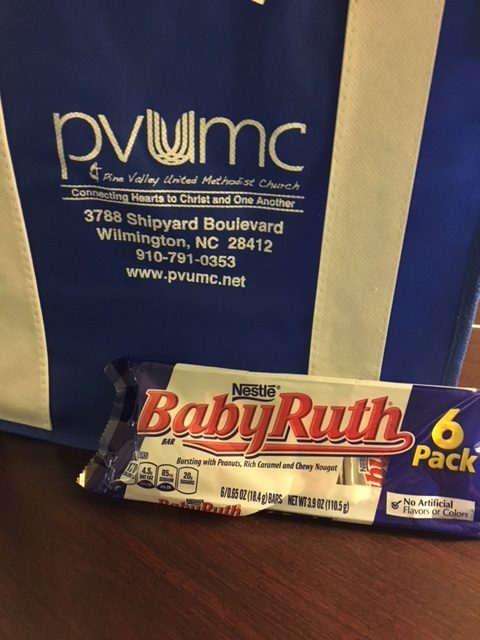 3. The people of Pine Valley love to worship.  Over 300 people came out on Monday night in which there was ice on the streets of Wilmington.  And it was the same night as the National Championship Game.  Remarkable turnout and remarkable faithfulness.

4. People are more apt to purchase books after they hear you speak than before.  Thankfully.

5. Volunteers in the church nursery are NOT holding babies.  The ARE inviting the tiniest among us into a living relationship with Jesus Christ.  That wasn’t my bottom line on Monday night, but it was the line that had the most resonance.

6. If you’re judged by the company you keep, I am blessed & highly favored.  I mentioned earlier that I am preaching TWO out of the FOUR nights.  The revival began on Sunday night with Andy Lambert of Oak Ridge UMC near Greensboro.  I have known & respected Andy as preacher and leader from more than 25 years.  The revival concludes on Wednesday night with Carolyn Moore from Mosaic UMC in Evans, Georgia.  She might know a thing or two about the Holy Spirit as she wrote a book called Encounter The Spirit which you can pick up here.  I’ve used that book as well as her other material when leading various LifeGroups at Good Shepherd.