The majority of the messages from the current Beyond emphasis come from the Gospel of Mark.

Every since my first semester at Asbury Seminary, where Dr. David Thompson taught a class with the creative title of The Gospel Of Mark, it has been my favorite of the four biographies of Jesus.  I still have my notes from that class, including the blue exam book on which we wrote our final.

Anyway, with that sort of intensely positive experience, it is perhaps natural that when we come to a high water mark in the life of the church, I draw inspiration from a book that means so much and that I know so well.

So here are five facts about Mark that you may not have known before:

1.  Mark is in such a hurry to start his book that he doesn’t give us the Christmas story.  Matthew starts with Jesus’ genealogy, Luke starts with Mary’s pregnancy, and John starts, for all practical purposes, in outer space.  In contrast, Mark begins in a rush — the beginning of the good news about Jesus the Messiah, the Son Of God — with Jesus already thirty years old and ready to receive baptism from John the Baptist.

2.  The entire book is to settle the question of Jesus’ identity.  Mark and his readers know from the first sentence that Jesus is the Messiah.  However, the characters in the book don’t know what the audience already does.  The disciples’ cry in the aftermath of Jesus’ calming the sea is the question that drives the whole narrative:  Who is this man?  (4:41).  The demons know.  The Holy Spirit knows.  But only when Peter gives his declaration in 8:29 — You are the Christ! — do any people know.  Following that dramatic moment, Jesus progressively unveils his identity until the book’s climax when a Roman Centurion — an outsider, a Gentile — looks at Jesus on the cross and exclaims, “Surely this man was the Son of God!”  (15:39).  Identity solved.

3.  Mark 1-10 takes two years and 51 weeks; Mark 11-16 takes one week.  I mentioned on Sunday that time slows down in Mark. The first chapters are at biblical light speed; at once or immediately are the most common phrases.  By the time Jesus enters Jerusalem for his last week on earth, Mark becomes painstaking in his attention to detail (check 14:51-52, for example).  We are left with the realization that the final week of Jesus’ time on earth is of eternal significance.

4.  Mark is an artist.  He is not only a wise theologian; he is a brilliant literary artist as well.  I shared what I believe is the most compelling example on Sunday:  when James and John ask Jesus in 10:37 “Let one of us sit at your right and the other at your left in your glory,” Mark demonstrates what they were really asking for with stark brutality in 15:27:  “They crucified two rebels with [Jesus] one on his right and one on his left.”  Such language is not accidental; it’s genius. 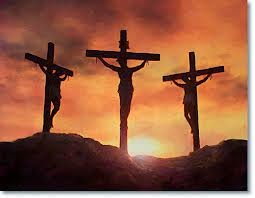 5.  Mark leaves the resurrection in our hands.  People from all theological persuasions agree that Mark ends his gospel at 16:8 — “They said nothing to anyone, because they were afraid.”  Most bibles put verses 9-20 in italics or as a separate section, explaining that the oldest and most reliable manuscripts simply stop at 16:8.  People squirm at the abrupt ending only because they don’t see Mark’s purpose:  the women were afraid of and silent about the resurrection, but what will YOU do with it?