I’ve been to reasonable number of concerts in my life.

Since my very first — when I was 15 a friend and I drove (well, he drove because he was 16) from Dallas to Fort Worth and saw the Eagles on their Hotel California tour — I’ve seen one or two concerts a year.

There have been some disappointments — like when Eric Clapton didn’t sing Layla & when the most recent Eagles reunion didn’t sing The Boys Of Summer — but the good moments have far outweighed the bad.

So: what are the best moments out of all those concerts I’ve been to? Not the best concerts, but the best individual moments?  Here they are:

5.  When the Rolling Stones actually turned “Miss You” into a rock song.  The Stones came to Charlotte in 2005 and were actually the first to perform in Time Warner Arena.  So I took Riley (then 13) to see them.  Before one of the songs, Mick Jagger made an innuendo-laden reference to the Stones’ role as the “first” in the arena, and let’s just say that made for interesting drive-home conversation with a 13 year old boy.  Anyway …  the highlight of that night occurred during a song I typically don’t like:  Miss You.  With guitar distortion and Mick’s remarkably robust vocals, they turned a disco wannabe into a rock epic. I wouldn’t have believed it if I hadn’t heard it.

4. When Bruce Springsteen threw a rose into the first row . . . and we caught it.  When Julie and I lived in Kentucky, Springsteen stopped in Lexington for his Tunnel Of Love tour.  Even though we weren’t big fans (then), we still waited in line for a lottery distribution of tickets.  And we won the lottery.  So our seats were literally front and center.  Springsteen came out at the beginning of the show, asked, “Anybody want a date?” and tossed a rose right to us. It’s still in a photo album we have from 1988. 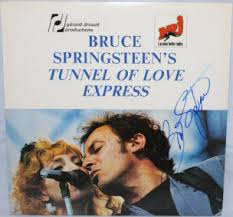 3.  When Paul Simon sang “You Can Call Me Al” . . . twice.  In his 1991 Rhythm Of The Saints tour, Simon was in the habit of singing You Can Call Me Al one time through and then immediately saying, “want to heart it again?”  Of course we did.  And speaking of hearing that song twice, how can I miss a chance to give you that one-of-a-kind video?

2.  When Don Henley sang “Hotel California.”  In 1985, Julie and I saw Don Henley in Philadelphia as part of his solo tour.  For some reason, I was convinced that he was not going to sing Hotel California for us.  I was wrong.  After an intro that sounded nothing like the distinctive opening riff, he launched into “On a dark desert highway . . . “  I was 23 years old, and I was very happy.

1.  When Randy Meisner hit the high note on “Take It To The Limit.”  Remember that first concert in Fort Worth in 1977?  Still contains the best moment of them all.  You have to listen to the very end to get the full power of Randy Meisner’s falsetto “please!”