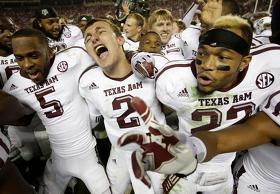 But my warm heart that night got me thinking: what are some other college football results that you just didn’t see coming?

So here they are . . . my Top Five College Football Upsets.

5.  2007:  Stanford d. USC 24-23.  This was Stanford before the Andrew Luck era.  They were bad.  And USC  had won two of the previous three national championships, barely missing out on the trifecta the year before.  The line?  USC by 40.  The advice?  Take Standford and the points.

4.  1984 Orange Bowl: Miami 31, Nebraska 30.  All season long, the talk had been about how this Nebraska team was the greatest in the history of college football.  And it probably was.  Except for this New Year’s night, the game that launched the era of “The U.”  I ached for Tom Osborne when Nebraska’s two point conversion attempt failed.

2.  1969: Michigan 24, Ohio State 12.  If you weren’t around then, you can’t imagine how good Ohio State was in 1968 and 1969.  My football awareness was just dawning, and they were frankly unbeatable.  National Champs in 1968, the whole team back in ’69, and undefeated up to its final game with Michigan — whom they had beaten 50-0 the year before.  But out of nowhere, Michigan was inspired, Ohio State was flat, and six weeks later the University of Texas had the title everyone thought was going to OSU.

1.  2007: Appalachian State 34, Michigan 32.  What does Job say?  You give and take away.  We gave Michigan one; now we’ll take one.  I was officiating a wedding on that September Saturday in 2007 and most of the folks in attendance had App State connections.  Needless to say, I preached a short wedding homily so we could get back to the business at hand.  And who in the world would have predicted that blocked kick?