By way of review: the bible is not a book.  It is a library.  Many different authors, multiple writing styles, written over a long span of time.

And like any good library, the bible has a biography section.  Four biographers (also known collectively as evangelists) — Matthew, Mark, Luke, and John — and one subject, Jesus.

Of those four biographers, my favorite rendering of Jesus’ story is Mark’s.

Some of that is due to my first class in my first semester at Asbury Seminary, a class in bible study method that used Mark as the raw material upon which we would hone our craft. 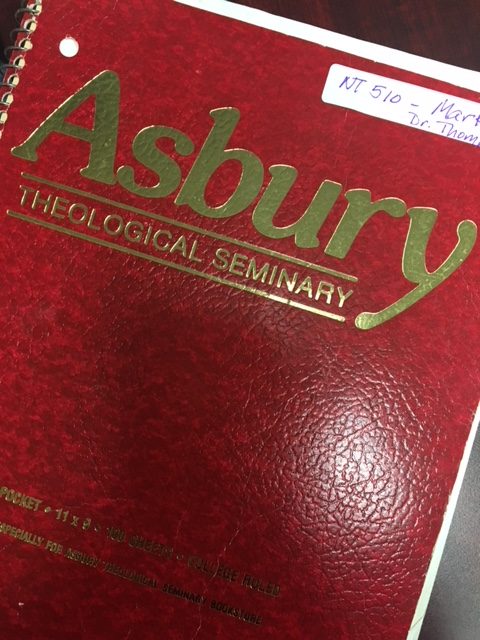 Yet beyond that class, I have found Mark to be an endless reservoir of both truth and art during my time in full-time ministry.  My Mark Crush has culminated this spring with our pre-Easter series, A King’s Ransom.  So here are five characteristics that distinguish Mark from his other three biographers:

1. Mark starts in a hurry.  Depending on which translation you use, the early chapters of Mark are full of “immediately,” “at once,” “without delay,” and “just then.”  The pattern is unmistakable.  Mark provides no nativity scene, no manger, not even Jesus in the temple at 12.  He starts with Jesus at 30, beginning his public ministry, and rushes from one scene to another.  Mark’s breakneck speed continues til 8:29 (more on that below) at which point the  narrative slows down dramatically.  Mark 1-10 takes two years and fifty-one weeks; Mark 11-16 is the slow, agonizing route through Jesus’ final seven days on earth.

2. Mark is an identity narrative.  From the beginning, the reader knows something the characters do not:  that Jesus is “the Messiah, the Son Of God, as it is written in the Isaiah the prophet” (1:1).  Early on, the demons are the only ones who recognize Jesus for who he is (5:7); Jesus’ own followers are notoriously slow to catch on — “who is this man?” (4:41).  Finally, Peter in 8:29 becomes the first flesh and blood human to master his Master’s identity:  “You are the Messiah!”  Of course, Peter immediately begins to put conditions on Jesus’ Messiah-ship, earning the name “Satan” (8:33) in what is for sure the quickest fall from grace in Scripture.  The culmination of Mark’s identity reveal comes at 15:39 where a Roman centurion — a Gentile, an outsider, an enemy, a mocker — becomes a marveler at the crucifixion:  “Surely this man was the Son of God.”  Like any good artist, Mark doesn’t tell you what he’s done; he just does it.

3. Mark does NOT give us Long Talker Jesus.  If you want a Gospel with a lot of the Red Letters, don’t go to Mark.  Jesus’ longest speeches are in Matthew and in John.  In Mark’s hands, Jesus is a man of verbal brevity and decisive action.  That’s why the few addresses Jesus does give in Mark resonate with unusual power:  “For the Son of Man came not to be served but to serve and to give his life as a ransom for many” (10:45).

4. Mark’s linkage of the nervy request of James and John and his depiction of the crucifixion itself is where theology meets art and the result is brutal beauty.

35 Then James and John, the sons of Zebedee, came to him. “Teacher,” they said, “we want you to do for us whatever we ask.”

37 They replied, “Let one of us sit at your right and the other at your left in your glory.”

27 They crucified two rebels with him, one on his right and one on his left.

And now you know the degree to which James and John do not know what they are asking.  Again, Mark doesn’t have to tell us what he’s done; he shows us.

5. If Mark starts hurriedly, he ends abruptly.  The most widely accepted ending of the Gospel of Mark is at 16:8:

8 Trembling and bewildered, the women went out and fled from the tomb. They said nothing to anyone, because they were afraid.

It’s the evangelist’s way of putting the end of the story back in your lap:  at this stage this women were silent with resurrection news.  What will YOU do with it?