My occasional glance at this year’s Olympics has again brought home the most troubling reality in sports:  choking.

There are two ways of choking in sports.  The first happens when the athlete is so overwhelmed by the situation that he or she never really shows up to compete in the first place.

Like when I lost 6-1, 6-0 to my opponent from our most hated rival during my senior year of college tennis.

The second kind of choking is even worse: when the athlete is on the verge of a big win and somehow finds a way to turn the expected victory dance into tears of defeat.

Like when I had match point against a favored opponent in the 1979 National Boys 18-and-Under Grass Court tournament, hit a forehand (of course) into the net, and found a way to lose 7-6 in the third.

Not that I’m still haunted by those losses or that choking.

For this post, I’ll focus on the second kind of choking.  I’ll also stay away from Olympic sports as those are almost too cruel:  in every other sport a choker can come back next year for redemption.  An Olympian has to wait four.

So what are the top five “snatch defeat from the jaws of victory” chokes I’ve seen?  Here goes: 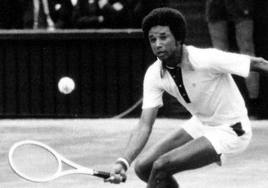 5.  Arthur Ashe loses to Ilie Nastase in the 1972 U.S. Open.  You have to know that Arthur Ashe was my hero when I was ten years old.  And he was playing beautifully against the Romanian Nastase in the 1972 finals, leading two sets to one and 4-2 in the fourth.  But then . . . he let Nastase’s antics and the pressure of the moment get to him, and an hour later he was giving the runner up speech.  Thank God he eventually won the 1975 Wimbledon. 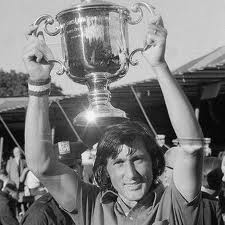 4.  Boston Red Sox lose to New York Mets, 1986 World Series.  Everyone blames Bill Buckner for the Red Sox’ loss in Game Six.  What they fail to remember is that the game was already tied when Buckner made his error, thanks in large part to relief pitcher Bob Stanley’s erratic pitching.  In any event, it only took a matter of minutes before the Sawx went from surefire Game Six winners to no-way-they-could-take-Game-Seven losers. 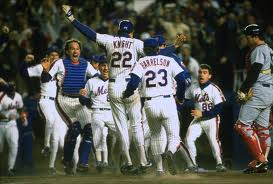 3.  Greg Norman loses seven stroke lead, 1996 Masters.  Watching this happen in real time was like watching a car wreck in slow motion: you know what’s going to happen, you know it will be ugly, but there’s nothing you can do to stop it.  Norman was so much better than the rest of the field for the first three days of Augusta.  Unfortunately, they don’t give prizes for 54 holes.  Nick Faldo (you’ll see him again) was the beneficiary of Norman’s gag. 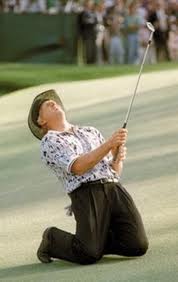 2.  Memphis loses to Kansas, 2008 NCAA Finals.  Led by Derrick Rose and coached by John Calipari, the 2008 Memphis Tigers were the best team in the land yet they had an Achilles’ heel: free throw shooting.  Bill Self’s Kansas squad knew that, fouled incessantly over the last two minutes, and Memphis clanked enough from the line to turn a 10 point lead into an overtime loss. 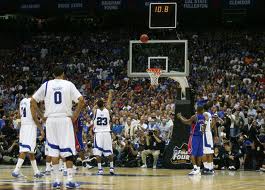 1.  Scott Hoch misses 18 inch put that would have won 1989 Masters.  This one is just sad for two reasons:  1) “Hoch” rhymes with . . . “choke”; and 2) Hoch never really recovered and never won a Major.  Guess who gained from Hoch’s missed gimme?  Nick Faldo.  Of course.  Maybe that’s why he such a good golf announcer these days. 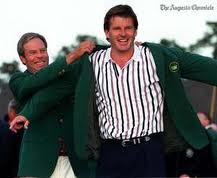