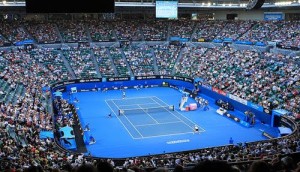 Every year at this time, the eyes of the tennis world turn down under as the Australian Open kicks off the season in what they’re calling “The Grand Slam Of Asia and The Pacific.”

And my mind turns to that time in 1976 when my parents, older brother and I spent five months in Sydney.

My father was on a sabbatical from his faculty position at the SMU Law School. So he arranged a project at a university in Sydney, and took my mother, brother, and me along between January and May of 1976.

We stayed in a 12th floor apartment that had a spectacular view of the Sydney Harbor. To work on my fitness, I used to run up those 12 flights of stairs to the apartment. And I wonder why I developed some back problems?

Here are my top five memories of what it was like to live temporarily in Australia:

1) I played tennis on grass courts for the first time. As good as promised.
2) Instead of hamburgers, Australians liked meat pies. Almost like a single serving chicken pot pie except stuffed with beef and then drenched in ketchup. It grows on you.
3) In rural Australia, we really did have kangaroos jump across the road in broad daylight, much like deer do here at night. Except for the road kill part.
4) Australian colloquialisms. “Fair dinkum” was a catch-all phrase sort of like “OK” or “well done.” “Bloody” is to add emphasis — just short of profanity — to whatever it is you are saying. “Sheila” is a catch all for “women” — there was a time in Australia when so many baby girls were named Sheila they started calling women in general “Sheila.” Then there were Australian renditions of those words only an eighth grade boy could love.
5) Left side driving. Even as a passenger, I never could get used to it. Not to mention remembering to look the correct way when crossing a street.