More than any other major rock band, Aerosmith owes its success to hip hop music. 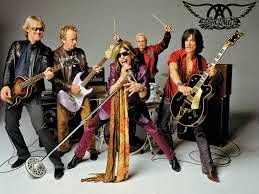 After a stellar run in the late 70s, Aerosmith limped into the 1980s boozed up, drugged out, and on rock & roll life support.  Then in 1986, Run-DMC did a remake of Walk This Way, accompanied by one of the best videos ever, the band sobered up and voila! — new music for a new day soon emerged.

My favorite Aerosmith songs come more naturally from the band’s first era, but that’s a function of my age more than anything else.

Rumor has it that rhythm guitarist Brad Whitford lived in Southwest Charlotte awhile back.  Whether or not he ever shows up at Good Shepherd, here are my top five Aerosmith songs:

3.  Walk This Way — the Run DMC version is the only way to experience this one.

2.  Dream On — The power ballad that got it all started.  Confession:  I always thought he was singing “sing for my left and sing for my tears.”  Uh, no.  It’s laughter and tears.

1.  Sick As A Dog.  What’s the song even about?  I have no idea.  It was never even a hit. I just know I used to listen to it over and over and over (always hitting rewind on my cassette player!).  I even remember writing a letter to a girl I liked in Kalamazoo, Michigan and telling her how much I liked the song.  Listen to it below and maybe you’ll understand why she never wrote me back.