Top Five Realities Of Being A Lifelong SMU Football Fan

A lot of you know that because my father taught in the Law School at Southern Methodist University for 31 years AND because I grew up going to every home football game every year, I still have a quasi-irrational attachment to the SMU team.  I didn’t go there for college, mind you, nor did I attend the Methodist seminary that is on its campus.

But I love the football team.  And that love takes a lot of patience.

And this year has been the most dreadful of them all.  Currently 0-11, the Mustangs have been outscored by their opponents 441-97.  Their coach quit after the second game.  Whenever they have played on television, the outcome has been decided before the end of the first quarter.

Yet in the midst of that misery, yesterday brought a glimmer of hope: a new coach.  Chad Morris, who for the last several years has been the architect of Clemson’s high octane offense, was named SMU’s head coach yesterday.  The Clemson experience means that means he coached NFLers like Sammy Watkins and Tajh Boyd.

And now he cometh to Dallas.  Here he is at the press conference announcing his hire: 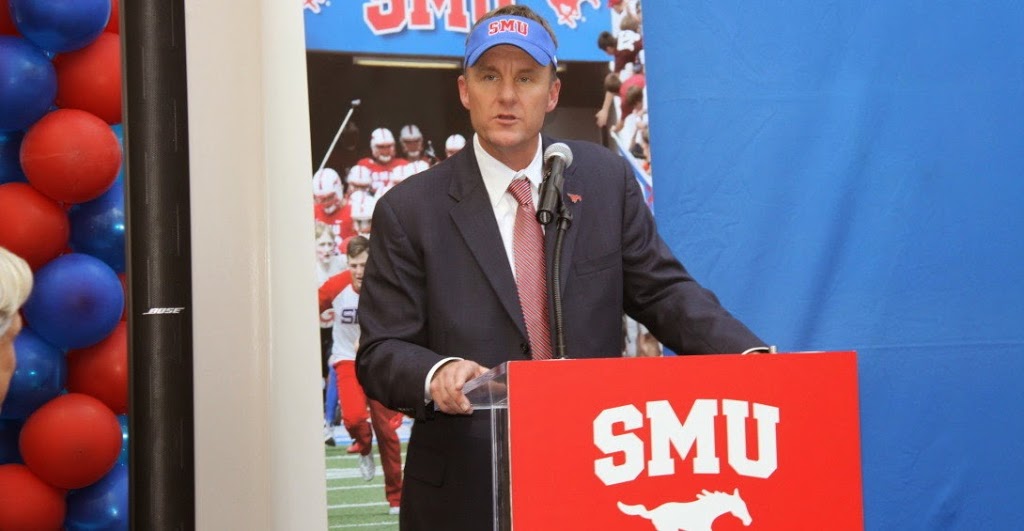 So with this sliver of optimism, it’s time for me to take stock of my loyalty to SMU football.  Here  are the Top Five Realities of following SMU football — a top five that certainly apply to me and maybe to Coach Morris as well.

2.  We’ll never be in the same Conference as the University Of Texas again.  Back in the glory days of the Southwest Conference, the game I looked forward to the most each year was against the hated Longhorns of Texas.  But in the aftermath of the SMU Death Penalty (see above), the SWC disbanded and for the most part, the private and public universities in Texas went their separate athletic ways (except for TCU and Baylor, but that’s another story).  Now, instead of annual games against Texas and Texas A&M, we’re trying to conjure up rivalries with Memphis and Connecticut.  In football.

3.  We won the National Championship in 1935.  And I think in 1982 as well.  The 1982 team went undefeated but tied Arkansas.  It also beat Dan Marino-led Pitt in the 1983 Cotton Bowl, a game played in bone chilling cold and rain.  I know how cold it was because I was there.  Anyway, later that night (New Year’s 1983), Penn State beat Georgia in the Sugar Bowl and the voters later gave the title to the Nittany Lions even though they’d lost to Alabama earlier in the year by 20 points.

4.  We have the best dressed band in the land.  At least that’s what they say.

5.  And we have the best uniforms in football.  Especially the red helmets and blue jerseys.  If looking good is a prelude to playing well, then the Chad Morris era might just be one to remember. 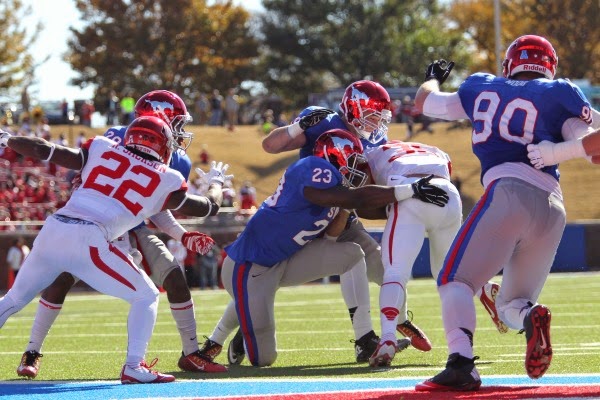