To Illustrate? Or Animate?

We preachers spend a lot of time and energy trying to bring life to our sermons through what have historically been called illustrations.

Donald Grey Barnhouse, longtime pastor of Tenth Presbyterian Church in Philadelphia, compiled the most famous collection of such sermon helps in a book titled, appropriately enough, Let Me Illustrate.

I have found it helpful to divide illustrations into two separate categories:  examples of and analagies to.

By an example of . . .  I mean a story, anecdote, or statistic that reinforces the point you are trying to make.  For example, many people around here remember how my father would make me a peanut butter and jelly sandwich when he’d pick me up from middle school to take me to practice tennis.  It was a small gesture with a large impact, and I’ve told that before in making points about parenting in general and fatherhood in particular.  For sermon purposes, stories you actually experience are usually better than those you pick up somewhere else.  (And nothing is more deadly to good preaching than a commonly-known story that dozens of preachers have told before you!)

By analogies to . . . I mean an object or fact that answers the question what’s it like?  It’s not so much a story as a reality from daily life that the preacher then places into the sermon.  Tony Evans is the undisputed Master Of Analogy and I end up “borrowing” many of his ideas.  Including the one where a common kitchen product is made of oil and water — which don’t get along — yet are brought together by an emusifier: eggs.  The product?  Mayonnaise.  Well, in the same way, different races, cultures, and people groups who otherwise might not get along are brought together by Christ — the divine emusifier in a full color church.  That’s what it’s like.

Over the last several years, I’ve discovered a second way to drive something home in a message:  animation.

What’s that?  It’s not drawing a cartoon while preaching even though I have to admit that would be pretty cool if I could do it.

No, animation is doing something physically instead of merely talking about it verbally.  For example, a couple of years ago while giving a talk on what it’s like when you are “over your head” or “out of your league,” I pulled out a guitar and played — painfully, pitifully — the opening riff to Aerosmith’s Walk This Way.  One of our real guitarists was standing behind me in the shadows of the stage and once my half-baked attempt was finished, he did the real thing.  Point made.

Another time I took a hammer to a tube of toothpaste as a way of showing once something comes out of your mouth, you can’t put it back in.

Back in 2012, during a series called Royal Pains, I had a message called “The However Kings.”  The message concluded with a moment of animation. 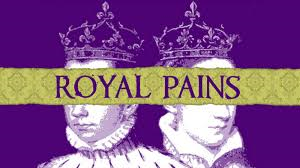 I wanted to show how God’s desire for the kings we looked at was for them to demolish the high places of pagan worship in Israel, not to tolerate them.  (The message’s hook was What you tolerate today will dominate you tomorrow.)

So I wanted to demolish something on stage.  Three times.  I thought of breaking some wooden boards — but I don’t know karate or judo.

I thought of tennis rackets — something I have no little bit of experience demolishing in anger — but tearing three of them up would get expensive.  (But back in the day, when I was really mad and the rackets were free, it was delicious!).

So I settled on plates.  I bought three, put a brick in the bottom of a tub that was next to where I was preaching and at the end of the message said that what God had wanted Joash, Jotham, Amaziah and the rest to do was not tolerate evil in their lives but demolish it.  Then I threw the plate down and just so you know, when plate hits brick with force, plate gets demolished.

And, I pray, larger point animated for the people of Good Shepherd.

Sign up for my newsletter and get sermon tips, information, and updates.