Some Time With A Benevolent Czar

On Tuesday night, I had dinner with David Benjamin, who was my tennis coach at Princeton University from 1980-1984.  Here we are at a local Princeton eatery: 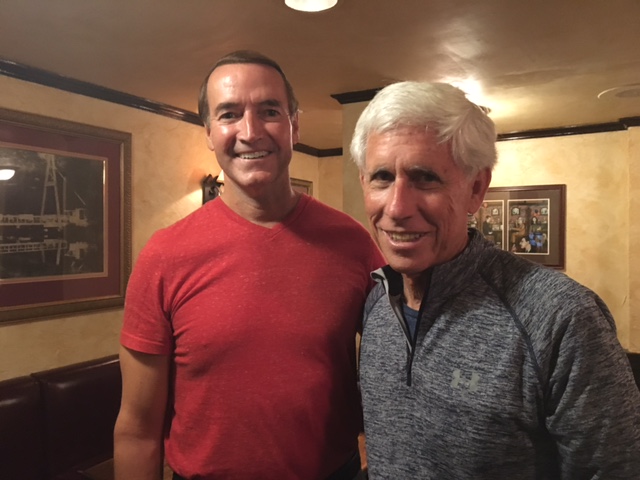 As I shared in an earlier post, I am in the Garden State this week preaching and teaching at the Ocean Grove Campground.  So after I completed my teaching duties on Tuesday, I hopped in a car and drove a hour due west to re-visit my old college haunts and to see some old college-era friends.

Dave and I first met 37 years ago when he was firmly entrenched as the coach of the perennial Ivy League champions and I was trying to decide between taking a scholarship to one of the Texas schools or venture up north the Ivy League for an entirely different kind of academic and athletic experience.

At that time, Dave not only coached Princeton but he also launched and led an innovative association for the college tennis coaches around the country, leading the late Dan Magill of the University of Georgia to describe him with the memorable phrase:  “the Benevolent Czar of college tennis.”

So last night we enjoyed both food and nostalgia.  Dave recalled that his primary memory of what it was like to coach 19 year old me (overly serious, self-absorbed, hyper-critical … glad to see nothing’s changed!) revolves around a match against a player from Yale.  I had lost the first set, and Dave, who was a master tactician, wanted me to exploit some of my opponents’ weaknesses.  In frustration, I answered, “But what about ME?  If I just get my game together and serve well, there’s nothing he can do.  So help me fix me!”

Dave was too smart to play into that myopia, either in that particular match or all those that ensued.  With the savvy and skill of a therapist, he instead nudged me into seeing the bigger picture in that match in New Haven, as well as in life beyond it.