The Intolerance Of The Tolerant

If you lead a seminary and Eddie Fox is one of your graduates, you have reason to be very, very proud. 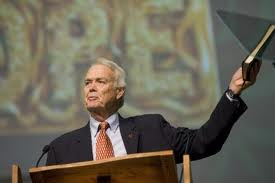 Who is Eddie Fox and why do I say that?

He is a widely published and highly respected pastor, author, and leader who since 1992 has been the Executive Director of the World Methodist Evangelism Institute.  His 1986 book Faith Sharing (co-written with George Morris) was instrumental in my own call to enter seminary.

And speaking of seminary, Fox is a 1962 graduate of Candler School of Theology, the divinity school within Emory University.  While there, Fox graduated first in his class.

With all those accomplishments, then, it seems logical and proper that Candler would honor Fox with its Distinguished Alumni Award, right?  So in August, the seminary did just that.

Fox’s selection has created a furor on the Emory campus.  Is it because of some shady ethical dealings in his background?  No.

Is it because of a morals charge that has arisen?  No.

Is it because he has clergy hoof & mouth disease (can’t preach & won’t visit)?  Nope.

It’s because Eddie Fox stands with 2,000 years of Christian teaching in affirming celibacy in singleness and faithfulness in heterosexual marriage.  Meaning: he believes that homosexual intercourse is not God’s design for humanity.

And for many on the Candler campus, that’s the one belief that can’t be tolerated.

Zebulun Treloar, a Masters of Divinity student at the school, wrote an open letter to Fox that included these words:

“I have to stand in opposition to your being awarded an alumni award because of [your] views [on homosexuality]. This is also why I cannot be a part of a church that does not give full inclusion to people of all sexual orientation and gender identities.”

“It’s hard for me to want to lift up someone who engages in exclusionary rhetoric . . . Eddie Fox does not seem to represent the values of Emory University.”

And finally, the Emory Gay and Lesbian Alumni (GALA) announced on Twitter that its steering committee approved a motion opposing the award and recommended that Fox’s award be rescinded

You can read the story in the Emory Wheel here.

Now:  Eddie Fox is not a hatemonger.  He’s an exegete.  He’s not a Wesleyan Fred Phelps.  He’s a United Methodist Pastor.  Both his demeanor and his conversation are saturated with what we commonly call grace.

And not insignificantly, his view remains the official stand of the United Methodist Church when it comes to human sexuality.

But isn’t it interesting?  Those who would change Christian sexual doctrine for the sake of tolerance are so openly intolerant?

From my view, the story has a satisfying ending:  Jan Love, the Dean at Candler, decided to continue with Fox’s award despite the opposition.  In her words:

“Candler’s task is to continue to facilitate an open, vibrant community of conversation created with people who hold stark and different perspectives. And then we come together and call it Christian conversation . . . After careful consideration, I have decided to confer the award on the Rev. Fox. His love of Candler runs deep [and his] characteristics were among the reasons he was recommended for this award and why I believe he should receive it.”