The First Rule Of Real Estate & The Gates Of Hades: Week Three Of Head Scratchers

Yesterday’s third sermon in the “Head Scratchers” series was a lot of fun.

It also served as a reminder of the kind of things we treasure at Good Shepherd.

Nowhere is that more true in Scripture than with today’s Head Scratcher in Matthew 16:18 where Jesus says this:
18 And I tell you that you are Peter,[a] and on this rock I will build my church, and the gates of Hades[b] will not overcome it.
And where is Jesus when he utters these words?  16:13 tells us:

13 When Jesus came to the region of Caesarea Philippi, he asked his disciples, “Who do people say the Son of Man is?”

What’s the big deal with that location?  Only everything.  Caesarea Philippi was located about 25 miles NW of Galilee and it was for lack of a better term a hot zone for idol worship.  Its whole history was defined by the different idols worship there and religions practiced there.  The town sits at the base of sheer, rocky walls (AV from Rabbi site), and also at the entrance to an array of underground rivers and caves.  And many years before Jesus appeared, it was the scene of the worship of Baal, a god of the Canaanites that the people of Israel were often tempted to worship themselves – to cover all their bases.
Then when the Greeks came in to the territory, they made the area a place where they worshipped the fertility god Pan.  The town changed its name to Panea in honor of Pan.  Get this: both the Baal worshippers and Pan fans believed that every winter the gods entered into the caves by way of the underground rivers/springs and then spent the winter hibernating.  In the spring time, those fertility gods re-emerged from the caves and VOILA! spring fever and all kinds of reproductive activity.  It’s why part of the worship of Pan & Baal & others at the mouth of the caves involved . . . how to say it delicately? . . . human acts of fertility.  Prostitutes.  To guarantee your own fertility that spring once you honored the god of fertility.  So the town was not only a hot zone for idols, it was a Red Light District for people!  It’s hard for any church or synagogue to measure up to that kind of worship service.
And finally in Jesus’ day the area in question had been conquered by the Roman government.  In particular a leader named Herod Philip. And with great humility, he renamed the city . . . after himself.  Caesarea Philippi.  Caesarea is a way of honoring all the Caesars who ruled Rome:  Julius, Brutus, Sid & others.  It was the kind of city where you had an ongoing loyalty oath:  Caesar is Lord.    CP is all of a sudden Four Corners, Amsterdam, and DC all rolled into one, all on steroids.
So with this background, surrounded by idol worship, Caesar worship, Jesus – a mere Jewish carpenter! – deliberately sets himself in comparison to all the world’s religions by pressing the question with his followers in 16:13-15:

13 When Jesus came to the region of Caesarea Philippi, he asked his disciples, “Who do people say the Son of Man is?”
14 They replied, “Some say John the Baptist; others say Elijah; and still others, Jeremiah or one of the prophets.”
15 “But what about you?” he asked. “Who do you say I am?” 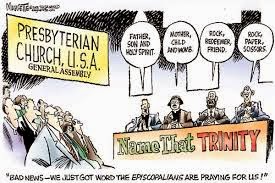 No no no.  Methods change, but message remains. Message, truth get celebrated, treasured, adored.  God help me if I ever get tired of meditating on what it means that God became man and defeated death. Colossians 3:11 means the world to me: Christ is all and is in all. Whew.
Yeah, we’ve got a rock band to help convey rock truths.  Jesus is Lord which means Buddha is not.  Heaven & hell are real.  The kingdom of God gets more of my allegiance than the USA. Gulp!  Celibacy in singleness & faithfulness in heterosexual marriage.  Odd, politically incorrect truth, but truth that liberates you and me and all of us from apathetic religion.  Because didn’t someone say then you shall know the truth and they truth shall set you . . . FREE?