The Bible Wasn’t Written TO You

It was written to the Israelites.

It was written to the church in Ephesus.

It was written to Matthew’s community of Jesus-followers who had started life as Torah-observers.

It was written to John’s community of beleagured, persecuted, and endangered Christians.

It was written to the Jews living in Babylonian Exile.

It was written to the church in Philippi.

And on and on it goes.  The bible is an incomparable collection of God-breathed texts, all of which had an original and intended audience.  And that audience ain’t us.

We run into all kinds of interpretive difficulty when we jump too quickly into asking the “what about ME?” question.

The best interpretation comes when we discern as much as we are able what those Scriptures meant to the original audience and then make application into our setting.  When you’re able to do that both accurately and in community, bible study is an enriching and productive experience.

Because you discover that while the books of the bible aren’t written to you, they are written for you.

We’ve got an opportunity coming up for you to grow your understanding of this inspired library.  It’s called Reveal, and it’s taught by James-Michael Smith, who is at the same time one of the smartest guys I know and one of my closest friends. 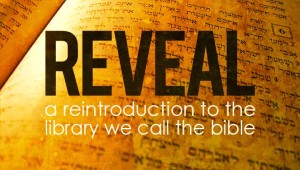