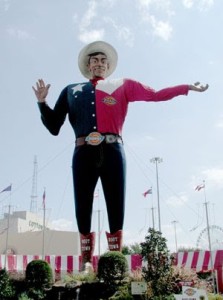 We’re heading to Texas for a few days to spend Thanksgiving with family.

There’s something about growing up in Texas that you can’t really understand . . . unless you grew up there as well.

An irrational loyalty? Rose-colored memory? Misplaced feelings of geographic & cultural superiority? All of the above? I mean, what other state was once an independent nation?

But here are some of my favorite reflections about growing up in Texas:

1. Big Tex. He stood like a colossus every year at the Texas State Fair. If you look closely, you can see the Cotton Bowl in the background. He served no purpose other than to remind fair-goers that everything really is bigger in Texas. I loved going to the Fair in the morning followed by an SMU football game in the Cotton Bowl in the afternoon.

2. Misperceptions. When I would meet people from other parts of the country, they inevitably thought that since I was Texan I rode horses and hunted. Um, no. Scared of horses and never held or shot a gun in my life.

3. The Southwest Conference (SWC). Back in the day, Texas had its own self-contained world of college football: the Southwest Conference. It was a fascinating blend of public schools — Texas, Texas A&M, and Texas Tech — and overachieving private ones — SMU, TCU, Baylor, and Rice. For some strange reason, they also allowed Arkansas in. Because of our family’s loyalty to SMU (where my dad was on the Law School faculty), we especially hated the University of Texas. My bitterness as a seven-year-old when they won the 1969 national championship was palpable. Sadly, those private school/public school rivalries motivated the football program at SMU to unparalleled levels of cheating in the late 70s and early 80s, leading to the “Death Penalty” for that program and the ultimate dissolution of the SWC as a whole. Now the big publics are in the Big 12 and the privates have been in the nether regions of college football conferences ever since. A January, 2010 National Championship game between Texas & TCU would be redemption for a late, great league.

4. Long Drives. It takes forever to get anywhere in Texas. The drive from Dallas to Abilene? Endless. Not much scenery, either. But that was part of the adventure. To pass the time, we played “Count The Cows.” And there were a lot.

5. Texas Tennis. My most enduring memories still revolve working my way up the rankings in Texas State tennis. Tournaments in Abilene, Corpus Christi, Houston, and San Antonio were always larger-than-life events. Through all those travels and experiences, I learned geography, patience, perseverance, dealing with adversity, and coping with success. Kind of like the lessons I learn today in ministry.