#TBT — That Time I Hit With Rod Laver

If you’ve been following the Australian Open at all, then you may have noticed that the featured matches are played on something called Rod Laver Arena.

Laver, for those uninitiated in the ways of tennis, was a pro player from Australia who won all four Grand Slam tournaments in the same season twice — 1962 and 1969.

He is such a legend in tennis circles that John McEnroe in his heyday refused to compare his own considerable brilliance with that of Laver.  His aura continued into the 2000s, as when he presented Roger Federer with an Australian Open trophy after one of his six titles, Federer burst into tears.  He still watches most of the matches in the arena that bears his name.

And one time, I got to warm Laver up on the court.  In tennis parlance, I hit with Rod Laver, and there’s really nothing cooler any player can say than that.

Well, as this newspaper story describes, Laver and Ken Rosewall played an exhibition match at the Hun School (not named after Atilla, by the way) in Princeton in 1985.  Laver’s son Ricky was a student there and the exhibition raised money for the school.

I was the tennis correspondent for The Trentonian newspaper, and so showed up early to cover the match.  I also had my tennis clothes and a racket or two.

Laver arrived early, I had my reporter’s notebook at the ready, and he noticed that I was also dressed like a player (something tells me I was wearing a Princeton Tennis warm-up suit).

He casually asked, “do you want to hit?”

A question to which no tennis player ever should answer, “no, I’m busy preparing to write a column.”  Trying to answer with enough cool to camouflage my suddenly flaring nerves, I said, “sure.”

So we hit for 15 minutes or so.  I remember being so nervous that I was going to hit a forehand into the bottom of the net (something I did with annoying regularity when playing people not named Rod Laver) that I arranged to hit as many topspin backhands as possible.  When a forehand was unavoidable, I hit no pace, mid court lobs.  But at least I didn’t miss.

When we were finished, he said, “You play nicely.”

Actually I don’t remember my answer.  But I do remember the experience.

Earlier this week, as Julie and I were cleaning out some files, I ran across the clipping of the story I wrote about that day with Laver, Rosewall, and The Hun School.  Seeing the piece in The Trentonian reading the story helped me to live it all over again. 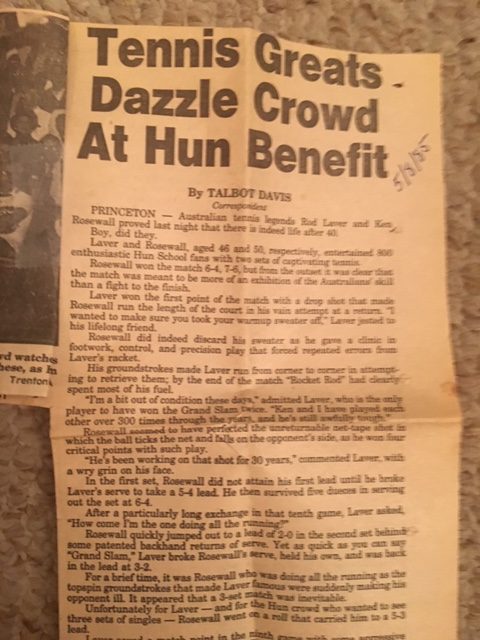