This past week I was Facebook-tagged in this photo below.  I have no memory — zip, zero, nada — of it being taken.

Here are some reflections on the photo and some of the people in it. 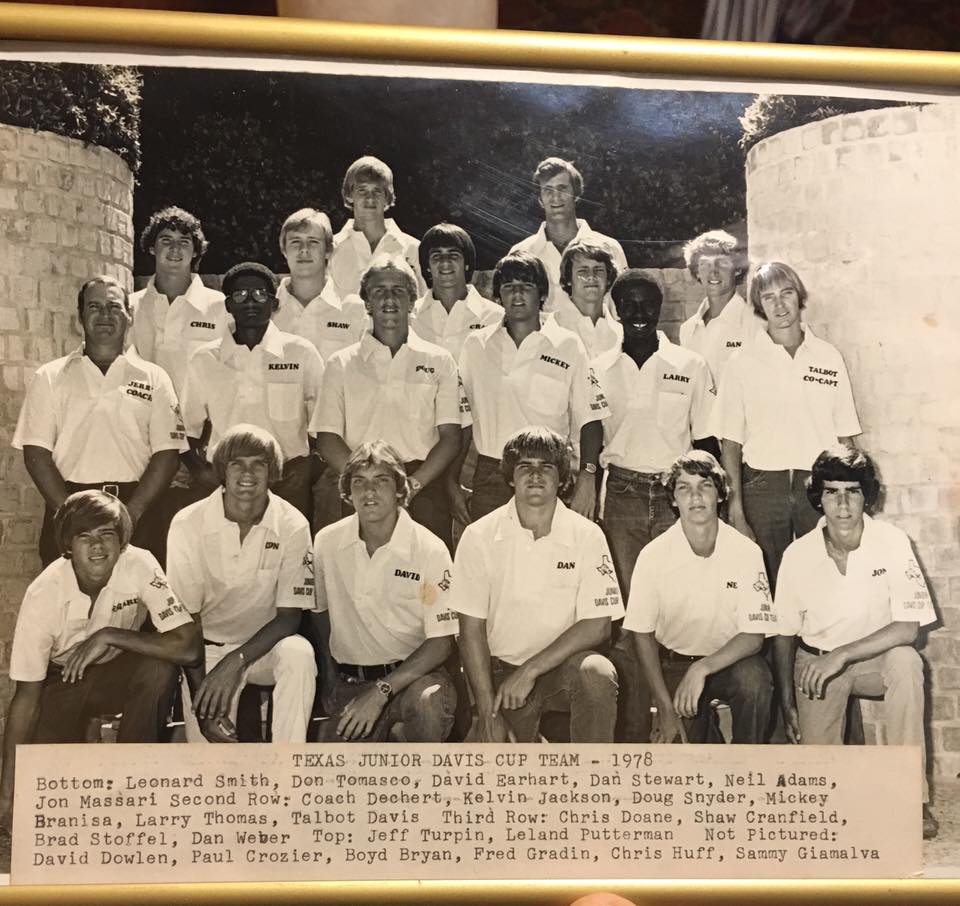 1.For many years, Leonard Smith (front row, left) has called me Co-Captain Tal.  I had NO IDEA why.  We weren’t on the same high school team.  While I was co-captain of the Princeton team as a senior, Leonard was at college in Texas and would not have known that factoid.  Why his insistence on calling me Co-Captain Tal?  One long-lost photo, one embarrassingly large shirt decal, one mystery solved.

2.David Earhart (front row, third from left) was a groomsman in my wedding.  Before that he was what we Methodists call prevenient grace in my life:  someone who, when I was yet to believe in Jesus, gave a subtle, often hilarious witness to his Savior.  God was working on me before I was looking for Him — and used David Earhart to do it.  In fact, it was this very summer of 1978 (we were both 16) when Dave did his most effective persuasion-by-comedy and I came to faith in January of 1979.

3.The blond guy on the top row left, Jeff Turpin, made it to the finals of Junior Wimbledon (for Boys 18 & under) that summer, losing a close match to Ivan Lendl who went on to be ranked #1 in the world and win eight Grand Slam titles.  Jeff played college tennis at SMU before competing professionally during the 1980s.  He and I shared the same coach in Dallas and played the same attacking, serve-and-volley style … but, um, I never got to Wimbledon at all, much less to the finals.

4.Third row center with dark hair is Craig Kardon who among this particular group has had the highest profile tennis career … as a coach, not as a player. He has coached Martina Navratilova, Ana Ivanovic, and Coco Vandeweghe.  The summer after this photo was taken Craig & I won the Boys 18 & under doubles championship for Texas.

5.To Craig Kardon’s immediate left is long-time kryptonite  & fellow Dallas-ite Brad Stoffel.  Prior to this year (1978) Brad had beaten me 15 times in a row, usually in matches that left him at #1 in Texas and me at #2.  Those 15 matches spanned ages 12-16.  But guess what?  No one — I mean NO ONE — beats me 16 times in a row.  In the spring of ’78 I beat him in a tournament in Houston and from then on had the upper hand in both rivalry and rankings.  My Dad always told me it would happen and it did.  Brad and I have re-connected in recent years and reminisce together about those earlier rivalries, plot twists, and melodrama.

6.This year of 1978 I was ranked #2 in Texas & #20 in the country for Boys’ 16 and under.  The #1 player in Texas was not Brad Stoffel (for once) but a young man from Sweden named Frederik Gradin who spent a year in our state and ultimately played college tennis at Rice.  He played like Bjorn Borg which of course psyched me out in the championship match.  The next year, 1979, was my banner year as I won the state championship to be ranked #1 in Texas for Boys 18 and under although I was just 17.

7. Why is my head tilted to the side and why do I look so sad?  I can hear my mom now:  “Smile, please, Talbot. You should always smile when you meet people.”